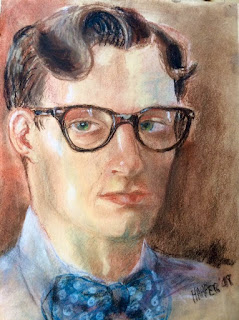 Sixty-five years ago today, I married John Phillips Burnell, Jr. We met in the Spring  of 1948 in a lunch line at Lowry Hall at Kent State University. He was with my friend Jean Beckmann, who had met him in a journalism class. At the time I was dating my Holden Caulfield boy friend Dick, who had just bought a brand new, bright red 1948 Plymouth convertible that winter. I liked Johm's looks, tall and thin and very well dressed. I was impressed with his dark rimmed glasses, too, and there were very few people wearing that style in those days. I would see him around campus occasionally, and we would have coffee once in a while with others at the student union. I enjoyed his sense of humor and I made him laugh, too. But I was still going with my mixed up cynical boy friend.
When I came back in the fall, absence had not made my heart grow fonder for Dick, and I asked John to the dorm dance, and that was it. I must admit that I had kind of stalked him, in that I knew where he usually hung out for a smoke on a wall I walked past on my way to Spamish class. Or maybe he hung out on that wall because he knew I would walk by on my way to Spanish class. Sometimes I never made it  to the classroom, actually. The student union was close by and a person needed a snack or a cup of coffee, after all.
That was the beginning of our relationship. On our first real date we double dated with my friend Colleen and BF Chuck. Colleen was one of the few girls at school who had her own car.. We ended up that night at the Big House, which had a dance floor and a fireplace.  ( Many years later it became the hangout for the Chosen Few, a rough biker gang.) We danced and then John and I sat by the fire and talked and talked. I remember our mutual love for cats was a major subject.  Because I had to be in by 11 o'clock, the evening ended fairly early,but we fad a very fine time.
We went together at Kent State until John graduated a year earlier than I.he started grad school at Ohio State. He had switched from journalism to sociology. I had picked up  unsociology, too, along with continuing art. We both found that area fascinating, since we were interested in social issues, which at that period were creating tension by the proponents of McCarthyism and the rising civil rights movement.
Johm was a graduate assistant at Ohio State, teaching and loving it. He had an opportunity to get a research job for a year, at which point, dear reader, I married hum.
I don't intend to make this a story of our marriage, which was cut short by his death in a car accident when he was only thirty-eight. He was teaching at Kent State by that time and working on his doctoral dissertation We had three girls and a boy on the way when that happened. It was a terrible loss, of course. I had never thought that one could survive such a thing, but we did. He had given me that strength.
The portrait is one I did in 1948. I don't remember when, but it must have been the fall after we first met. I had forgotten it, but Emily found it when she was recently home. She had it framed for me. I am so glad she did.

Posted by Guenveur in Kent at 5:51 PM

Thank you for sharing this.

Happy Belated Anniversary! He sounds like a wonderful person - ahead of his time. Exactly who I would expect you to be attracted to.

Guenveur, do you remember your visit to Dartmoor, Devon, UK in 1999 ? You stayed at our Bed and Breakfast near to a town called Chagford and we got on well together.
You might remember compiling a @Guide to those Wacky Yanks' that you kindly sent to me, and that I was thrilled to have ...
We sold the house in 1996 after 12 years there rescuing the house from it's knees and handing her over in prime condition, in order to rebuild a derelict farm barn. We lived on site in a caravan during the work with our teenage daughters, a large dog and elderly cat and as soon as we could we moved in and picked up the B&B trade again. This barn we sold 2 years ago and we are now living in happy retirement in Exeter in a modest town house for 6 months of each year and spending 6 months of the year Easter to November off on a rather smart narrowboat we commissioned with our savings.
After we left St. Johns West, I mislaid your guide, and after moving from the barn all our belongings were packed into boxes as this house is much smaller that our other homes. As you can imagine, I am only now getting around to unpacking some of the boxes, and yesterday to my absolute joy, I came across your guide carefully wrapped within old photos, school reports etc.
I have read it through once again and have marvelled at your keen eye and wit. The illustrations are such fun.
This time I will take much better care of it.
I am glad to see from this blog that you are still active
I shall copy this onto the email address I have at the foot of your kind letter
My very best wishes come with this message. Jill Pendleton jill@jillpendleton.co.uk