A Christmas Memory of My Own 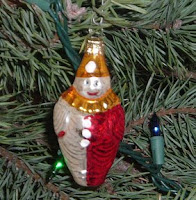 One of my favorite television presentations was on many years ago: "A Christmas Memory" based on a memoir by Truman Capote. Geraldine Page played his eccentric cousin with whom he lived in Alabama, in a house full of other relatives, by whom Truman and his old cousin were treated like outsiders. The time period coincides with my own childhood, particularly a Christmas we had to spend with my father's family in Montgomery. It was early in the Depression and my father's job in Atlanta would not start until the first of the year. We had been living in Philadelphia and New Jersey and the South was another country to my sister, brother and me. Everything smelled different and the people talked funny. (My father's accent had been tempered by a number of years in the northeast.) There was a girl cousin my age who had a playhouse in the back yard which she was not that thrilled to share. I don't know how we all fit into my grandmother's house since my father's sister and her family were also living there, so there were 4 of them and 5 of us, plus my grandmother. Typical of a southern household in spite of no money to spare, there was a maid and my uncle's "man" who, in a white jacket, served his breakfast, switched to a black jacket and chauffeur's cap and drove him to work in a disgracefully rattle trap roadster. Our Yankee mother was amused by this, given that our Christmas dinner was fried squirrel with a bit of buckshot in it.
As far as I was concerned it was a fine Christmas. There was a puppet show at the neighborhood park-"The Night Before Christmas" played out on a tiny stage which was pure magic to my eyes. Santa brought me a tiny teddy bear. I was a little bit envious of my cousin's doll, complete with a little trunk full of clothes, especially as my little bear was wearing only his fur.
It seemed to me that we were in Montgomery for a long time, but I found out later that it was only about 6 weeks. It must have been a terrible time for the adults, but for a self centered 4 year old, it was just about perfect. I have "A Christmas Memory", the Capote one,on video tape. I don't watch it every year, preferring to "ration" it so it doesn't get stale. It's lovely.
Posted by Guenveur in Kent at 5:35 PM