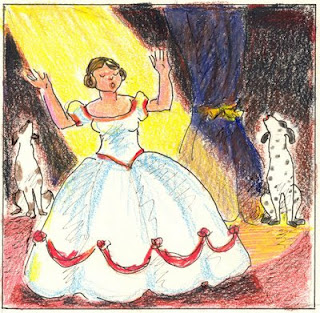 Friday last I went up to the university theater to see a musical version of "Jane Eyre." I have always loved this Gothic romance. The Orson Welles version came out when I was in high school, and my friend Ethel and I went to see it after school one day. We loved it so much we stayed to see it again, causing great upset to our parents, who had expected us home much sooner. The first time I went to England, I was able to to go to Haworth, where the Brontes lived. In the gift shop at their former home, there was a little TV set, playing the Welles version. In the very home where Charlotte had written it! On that same trip, my friend Susan went to see the non-musical play "Jane Eyre" in London, starring the actor who played the very bad guy in "Jewel in the Crown." Not so good as Welles, but it was well done.

The Kent State University Theater department puts on two musical plays every year and they are invariably outstanding, so I really looked forward to seeing this one. The major problem was that it was just not a very good musical. The set, the lighting, and the costumes were up to the usual excellent standards of the theater department. The singers were, for the most part, adequate. However, now that actors no longer know how to project, everyone was miked, but apparently forgot and tried to project anyway. The result was so distorted that it was hard to understand most of the content. I kept hoping the sound technician would adjust things, but that didn't happen. We had good seats, I don't have a hearing problem, and it was maddening.
The music was pretty terrible anyway and the dialogue was pretty bad, too. The actors had to sing their stories instead of acting them, which made for some pretty dead spots as they were standing there going on and on, sort of singing pages from the book. It's hard to describe the awfulness of this thing. One egregiously dreadful scene involved a pretty young woman playing Blanche, the woman who Jane thinks is going to be Rochester's bride, singing this cheery song about - God, I can't remember what it was about, only that she and the orchestra (which was excellent) weren't able to come to terms with the pitch. It involved a lot of very high note, just a hair off-key, which I am sure disturbed a lot of dogs 'way out in the county. All in all, a disappointment.
I almost forgot: Another excruciating aspect of this show was the attempt at an English accent on the part of the student performers. I noticed in the programme that they did have a dialect coach. I think that must have been the man I saw sobbing in the corridor during the intermission.
Tomorrow
Tomorrow I will have the surgery I mentioned in my previous blog. Everything is fine - I cleaned out my desk. Washed a load of underwear. Talked to everyone in my family. Talked to a few women who have had this "procedure" - I love that word - and obviously survived it. I should be back at the blog in a few days. Think good thoughts for me.
Posted by Guenveur in Kent at 5:25 PM

I'll say a prayer and be thinking of you. If you need anything at all, just give a shout across the back yard.

Thanks, Helen. I like your blog. I didn't know you were a quilter. Nice hobby!