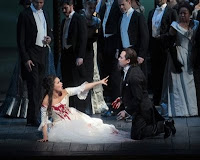 So I went to see "Lucia di Lammermoor" on Saturday in HD over in Akron. The theater was packed, since this is a favorite opera for many of us. One of the draws was Rolando Villazon, who is a terrific tenor, who is also very cute in a fuzzy big-eyed toy animal sort of way. However, Rolando was ill and was replaced by a very fine Polish tenor and the audience both at the Met and in the Akron theater all responded with a disappointed "awwww" when the substitution was announced.

Lucia was sung by the Russian soprano Anna Netrebko who has the perfect bel canto soprano voice but isn't much of an actress. In fact, the tenor who also sang beautifully wasn't much of an actor, so I think it is better to just listen to singers like that on the radio and not watch them, especially in High Def. The opera itself leads to some cognitive dissonance: a Scottish story by Sir Walter Scott, with Italians wearing kilts and emoting in Italian all over the place in a very non-Scots sort of way, not that there isn't the odd Scot who goes mad and stabs her husband on their honeymoon, especially if she has been forced to marry a man she doesn't love by her cruel brother in order to save the family estate. Happens all the time, I'm sure.
One thing that has always puzzled me about this story is that after Lucia offs the groom, she dies. It's necessary to the plot, but you never hear what she dies of. I mean, she has just spent about 20 minutes doing the mad scene, which would tire a person out, being incredibly difficult and requiring a lot of breath control, but I don't think it would kill a person outright. It hasn't killed any sopranos over the years, after all. (She is accompanied, by the way, by a glass harmonica which really adds to the eeriness of the situation.) This is such a really good old fashioned melodrama that the man she really loves, who goes by the old Scottish name of Edgardo, on learning of her death, stabs himself, while singing the most beautiful aria, managing to get through the whole thing before expiring.
I saw this opera years ago when the Metropolitan Uprear used to come to Cleveland in the spring for a week. Roberta Peters was Lucia and was wonderful and sang the mad scene without personally dying. In the production I saw Saturday, they had the dead Lucia come back as a ghost and hang out with Edgardo while he was singing and dying. It was ridiculous, if you want to know the truth.

Posted by Guenveur in Kent at 3:10 PM

Thank you for review. I think and feel exactly the same.
I am impressed reading your profile. Bravo! I like you very much..