Keeping Abreast of the News 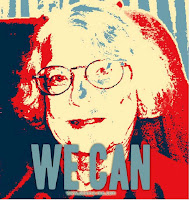 So I'll just start out from the beginning. I flunked my latest mammogram. That was not a good thing to hear. I had another, very painful one, called a compression mammogram during which one is very much compressed. Something showed up after they tried about 6 or 7 times and then I had a biopsy. What that showed was a very small but not at all nice little thing. It is stage one and non-estrogenic which is not too bad, if you have to have something strange living in your body. The surgeon says the prognosis is very good and that I have a choice between a mastectomy or a lumpectomy and to think about it and let him know. I asked him what he would recommend if I were his mother. He said the lumpy thing. So next week that's what I'll have, with a side of radiation to follow.

I shall now be a member of a club I didn't really want to join. This is not one of the things I ever thought about during one of those wide awake at 3 a.m. nights. Falling asteroids, yes, but cancer, no. I tried to de-disaster this, but it didn't work this time. I will be fine, but it does put a glitch in my equanimity. The hardest part is telling the family, but nobody panicked.
Last week there were two great concerts to distract me. In the morning, the Cleveland Orchestra had the Brahms Violin Concerto and Tchaikovsky's 4th Symphony with that great pizzicato 3rd movement. It was tremendous and thrilling. That night the Hausman Quartet, which is a resident group on campus, did a terrific free concert at the library with lots of fugues by Bach and Beethoven and ended with some tangos - it was Valentine's Day. I don't know if I'll make it to the Cleveland concert next Friday (my seat is in the very last row of the top balcony and I love it, but will I be in good enough shape to climb up to it?) and they're doing the Beethoven 7th. My friend Ethel's mother had all of the Beethoven Symphonies arranged for two pianos. She and her mother, who was from Germany, used to play together. The 2nd movement of that symphony was within my feeble capabilities, and we used to play it together.
In the meantime, there's the Academy Awards coming up. Predictions: "Slumdog Millionaire" for best picture, Sean Penn for "Milk" and Kate Winslet for "The Reade." I did like Anne Hathaway in "Rachel Getting Married", so that may happen. I didn't see "The Dark Knight", so I have no idea what all the buzz about the dead guy is. I did like Viola Davis in "Doubt" even though she was barely there. I'll have to watch the PBS "Oliver Twist", so I'll miss some of the broadcast, but since it goes on for hours, I'll be able to catch up in time for the big ones - best picture and actor/actress.
So, tonight I am going to see a musical version of "Jane Eyre." Can't imagine what tunes Mad Bertha will sing, but it should be interesting. Nothing like a Gothic tale to cheer a person up.

You had been pretty quiet recently, so I was glad to see your post even though the news was unsettling. It sounds like just about the best version of the situation, though, and I'll be wishing you the best possible outcome! Have fun with all those diversions, and be sure to let us know about the musical Jane Eyre...

My Bible Study Buddy was just saying today that we usually have a sympathy pain of agony when we hear of somebody with breast cancer, but she reminded me that bc isn't necessarily bad; she is a living reminder. But we all live in fear of the c word.