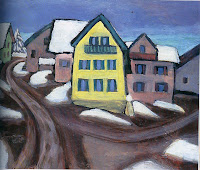 The last time I was in Germany, Emily took me to the Lembachhaus, a museum which grew from a private residence in Munich. A prominent feature of this museum is the work of the Blue Rider group. I had never heard of the Blue Rider, although among its members were Franz Marc and Vasily Kandinsky. They were similar to the French impressionists of the late 19th century in that their work had been scorned by the art establishment, which resulted in their banding together in 1910 to promote their "new" art. They started a journal, or almanac, called "The Blue Rider" to express their ideas about art.

Since my education in art took place during and immediately after WWII, I knew nothing of this group, other than those names mentioned above. (Germany and its culture was pretty much country non grata at that time.) What I saw at the Lembachhaus introduced me to some work which I immediately fell in love with, especially the work of Gabrielle Munter. She had met Kandinsky in Munich in 1902 as a student in an art school he had founded, and ended up as his mistress. (He was married, but, hey, we're talking about artists here.) They traveled together on painting trips with other like-minded painters.
In 1909, Munter bought a house in Murnau, which became a kind of headquarters for the Blue Rider Group. Kandinsky spent the summers there and he and Munter did decorative painting on the furniture and the woodwork which is still there to see. Murnau is a beautiful town near the Bavarian Alps. The house sits on a rise from which you can see the Schlossmuseum on another rise across town. The museum features her work, as well as that of other members of the group. She did many paintings from her windows and when you tour the house, you can see what she saw and the paintings she made. Her paintings look simple but are not. She uses color wonderfully. I guess her work would be considered expressionist landscapes, similar to the American Marsden Hartley who was her contemporary. Kandinsky went on to abstract expressionism, but she continued her own style.
She and Kandinsky were together until 1914, when WWI broke out and he had to return to Russia. They corresponded for years, but she only saw him once again the next year. However, she had kept safe in the house in Murnau his paintings, as well as that of other Blue Rider members, through both wars, and donated them to the city of Munich on her 80th birthday.
It's wonderful to discover someone you never knew about when you are a geezer. I have decided to try to do some work in her style. One is the view out my kitchen window. The other is of a strange building in Freising, a cathedral town north of Erding. It's part of the cathedral complex on a dome-like hill overlooking the town. I think it's a barn or a stable that may have been there before the cathedr 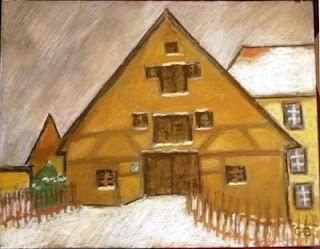 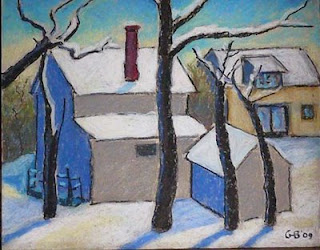 Word verification: splind which refers to a broken blade of grass

I really like YOUR picture. Not so thrilled with Gabrielle's. Now that you've identified the Blue Group, I'll probably see it everywhere.
I hope you'll do more 'out the window' pictures....maybe one in each season.

If you Google Munter images you can see more of her work.The one I used in the blog is not one of the best, but I included it because of the houses.Thank you for the kind words about my paintings, which are actually oil pastel.

I really enjoyed your paintings too. I think you captured the style of the Blue Rider Group. Thank you for introducing your blog readers to Gabriele's work. I had seen some of Franz Marc's work as I have started a quilt that is an interpretation of his Blue Horse painting.