The Hands of Phillip Seymour Hoffman 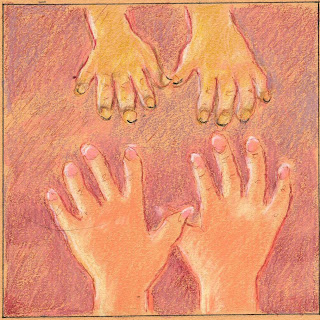 About a year ago here I made a comment about the personal hygiene of Hoffman in the movie
"Before the Devil Knows You're Dead." He had black fingernails, disgusting looking things.

Yesterday I went to see "Doubt", in which he stars as a priest, with Meryl Streep. There is a scene, which doesn't really advance the story, in which he is teaching a gym class in a Catholic elementary school. During this class he stresses to the boys the importance of keeping one's fingernails clean. He slowly walks around the class showing his clean nails to the boys. The camera zooms in on his hands. They are pristine. His nails are immaculate. He mentions that he likes to keep them long, but clean.

Now one never knows where one's blogs end up, who out there is actually reading them. I wouldn't have been surprised at all if Hoffman had looked into the camera and said, "And for that old nit-picking lady in Ohio, nyah, nyah, nyah!"
Phil, buddy, you have redeemed yourself. Thanks for taking care of that.

Meryl Streep plays an archetypal nun of the old school, the kind who would swoop down the aisle at the children's Mass, beads clicking, thump a distracted child on the head. A woman sitting in front of me actually flinched when she did this in the movie.

"Doubt" is a very fine movie, pervaded by doubt.The story takes place in 1964, before the priest scandals became public. She suspects Hoffman's priest of improper contact with one of the male students. She has no evidence. She is cold and distant with both students and colleagues. He is warm and friendly, and has taken an interest in a boy who has been brutalized by his father. Everything is ambiguous and the audience is left in a state of - doubt.
Posted by Guenveur in Kent at 12:33 PM

We saw it on New Year's Day and loved it. I flinched, too. Came home in a state of serious doubt. Wanted to believe him but afraid she was right. So well done by so many. And the boy's mother. Wrenching.

Word verification: inger which possibly could be a finger missing its first joint. Unless its a soft g in which case I dunno.