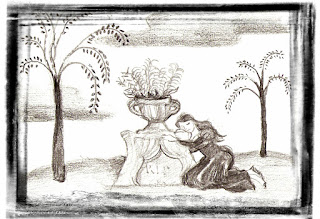 I had intended to do a blog on the habit that I find common to most people I know: the reading of obituaries. I had not meant for it to be an introduction to the year 2009, but it has fallen out that way. I have not had a happy new year. I spent that day itself in the emergency room for the second time that week. It started with a cold, and since I was all involved in celebrating Chris mas with a caroling party and a trip to the Boar's Head Feast in Cleveland, instead of hunkering down with chicken soup, garlic and herbal tea, it soon evolved into pleurisy and bronchitis, both of which are not good when one has asthmatic lungs anyway.

I love reading obits particularly to find out where the deceased was born. It tells you a lot about historical migration patterns. for example, when reading the obit of an elderly black person in the Akron newspaper, there is always some nickname, like "Pooky" or some such similar thing.

The place of birth is invariably someplace like Milledgeville, GA or Union Springs, AL or some other southern place, more typically Alabama than just about any other southern state, meaning they no doubt came north with the "Great Migration" of southern blacks seeking work in northern mills.

Most Italians in Akron were born somewhere around Carovilli, Italy. I can't say I know where that is, but it seems to be where the majority of Akron's Italian population hails from. Other white folks came from various Appalachian destinations, most commonly West Virginia, but also from places like Tennessee and Kentucky.

That's kind of what makes reading the obits fun and interesting. And yes, I LOVED the one about the lady who died of "complications of raising children"! That was a real hoot!