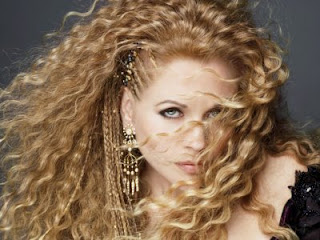 Last week's Live in HD opera was "Thais", starring the diva de jour Renee Fleming. I knew nothing of this opera except that beautiful violin piece "Meditation from 'Thais'", which I used to do my Tai Chi routine to, along with the adagio from Mahler's 5th symphony. (They worked perfectly with the moves and I could imagine that I was looking graceful but probably wasn't.) The story of "Thais" is as old as the hills: Bad woman (in this case a courtesan), good man (a monk). Good man tries to convert bad woman. She becomes good, he goes bad. She dies.

It was nice to see a performance in which the lead singers are actually very attractive. Renee Fleming is gorgeous, Thomas Hampson, who played the doomed monk, is very handsome. The music was as beautiful as the singers. It was just lovely. Renee Fleming has the most wonderful voice with an amazing range. She's not much of an actress, performing and singing mostly to the audience instead of her co-stars, but who cares.
There's one thing I wish someone would tell her. She claims to have sung with a jazz group while she was in school, and she has recently made a CD of popular songs and has performed on Garrison Keillor's radio show and other places. Oy! She is TERRIBLE, laughably so. Her voice swoops in an attempt to sound bluesy and guttural, and she is trying to be soulful and it sounds like hell. I think she has reached a point in her career where no one will tell her the truth. If anyone reading this knows Ms. Fleming, please tell her to cut it out and stick to opera or lieder and never, never, never try this again and to collect all those CDs and have a bonfire. Oy!
The violin solo comes in between scenes when Thais is meditating on her sinful life and making a decision to be a good woman and give up her evil ways and all. It was played by a young man who is one of the first violins in the Met orchestra and it was so beautiful you could die. He took a curtain call at the end along with all the stars and got tremendous applause, including from many people in the audience in Akron, Ohio, who seemed to be under the impression that he could hear them.
Posted by Guenveur in Kent at 10:04 AM