Thoughts About a Historical Day 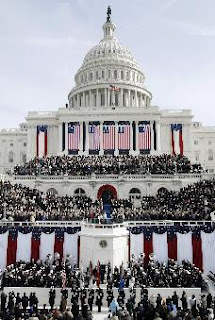 Like millions of others around the world, I spent Tuesday, Jan. 20, glued to the TV. I think the last inauguration I watched was Jimmy Carter's back in 1977. (He's still one of my favorite presidents, one who has contributed a lot to the world and humanity.) It was a grand day for people all over the world, who watched along with us here.Perhaps they think better now of our country, which has suffered from the hubris and arrogance of the most incompetent administration in history. The healing has started.

But yesterday was an amazing milestone for this country, something to be proud about and something my late husband John would have celebrated more than most, perhaps. He was a sociologist whose field was race and racism. He worked early on for equal opportunity and inclusion for all Americans. He didn't live to see the Freedom Riders in the South, Martin Luther King's sacrifices, and the Voting Rights Act at the time when the civil rights fight began to boil. When he was teaching at Baldwin-Wallace College in Ohio, some black students came to him about being denied access to the local skating rink, which claimed that it was for members only. He led a group of black and white students to the rink and when he and the white students were admitted without being "members" and the black students weren't, he confronted the owner and demanded an explanation. It made the front page of the local paper and infuriated the president of the college (who was a not so closet racist). When my husband was up for tenure, it was denied, based solely on this incident, since he had been named one of the best professors by the students. When an offer came from Kent State, we left BW with no regrets. Interestingly, tenure was granted retroactively after a faculty battle. It made no sense, but everyone felt that John had been vindicated.
At Kent State, he and some other young professors discovered that the university had approved off-campus housing where black students were turned away. They wrote a letter to the campus newspaper, which infuriated the president, who actually had a sterling record when it came to equal opportunity, having hired the first black professor at a state university, and had encouraged numerous instructors and grad assistants of color. There was one of those academic furors and finally the housing situation was cleared up - no open housing, no approval from the university. The bigger battles were to come, but sadly John was not around to fight them, and now we have an African American president who offers hope to all of us.
As I watched this massive crowd of happy people, I hoped that my daughter Emily was somewhere in there, and in spite of the impossibility of actually seeing her, I kept looking when there were close-ups. As of today, I haven't heard whether she and her friend Kick were lucky enough to get into the city or onto the Mall. She had said that just being in this country would be a good thing.
Some general impressions: Aside from an amazing hat, Aretha seemed to have gotten out of her natural vocal range, which spoiled her rendition of "America." Maybe nobody cared, but it was disappointing. I mean, she is the Queen after all. The minister who gave the benediction was wonderful, and I'm sorry I can't remember his name. I only know that, with MLK, he co-founded SNCC who were the very brave heroes of the civil rights movement in the 60s. His warmth radiated right through my TV. President Obama's (what a cool thing to write) speech was not particularly memorable, but it was the right kind of speech to make at the time, reality based: Enough with the swooning and hero worship; we have a hard job ahead of us, all of us.
Well, it was day to remember and treasure and like the rest of the world, I wish him well.
Posted by Guenveur in Kent at 5:37 PM

Rev. Lowery. And I have the text of that there benediction if you would like it. I thought it was stellar.

Word Verificaqtion: uncre which is a color somewhere between umber and ochre.

I didn't know these little tidbits about Daddy. Wow. I remember growing up and imagining him as a kind of "Atticus Finch" character. It's really nice to know that what I imagined is closer to the truth than I could have hoped.

Indeed, Daddy would have been immensely proud on Tuesday.