Beyond Belief, Beyond Decency 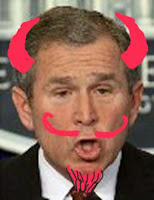 Reading Dick Polman's column from the Philadelphia Inquirer in today's Beacon Journal, I became enraged by the penultimate paragraph of his essay. He writes that during an interview on ABC News, when the interviewer stated that Saddam Hussein "had not conspired with al-Qaida and that al-Qaida had not been a presence in Iraq until we invaded it, Bush fired back:'So what?'"

Thousands of young men and women in the service of their country dead, thousands more maimed physically and mentally and their Commander-in-chief says "So what?" How can this man face the parents, spouses, children, brothers, sisters and friends of these young people he so carelessly sacrificed and say to them "So what?"

Tens of thousands of Iraqis dead and permanently injured and a country destroyed and the American instigator of this war says "So what?"

Billions of dollars that could have gone for public good spent on destruction and the leader of the free world says, "So what?"

How can we let this man walk away from the wreckage he has caused this country and the world with no accountability? Why are not more people outraged at both his actions and this demonstration of contempt for the people of this country? And yet, there are probably still people who, looking at his record and the damage he has wrought, will no doubt say themselves, "So what?"
Posted by Guenveur in Kent at 6:42 PM

This is so well done.

I posted a link on Chez's comments.

You may get some traffic increase as a result.

Word Verification: magort, which clearly refers to left-overs that have been left-over too long

I say forget the trial. Pardon the bastard -- so he can't invoke the 5th Amendment. Then drag him in front of a Truth and Reconciliation Committee for a full and thorough cross-examination.

Last, build the Bush Legacy Center across the street from his library. Fill it with exhibits and testimony from the aforementioned proceedings.

Putting Bush in the dock will not solve anything. Putting his presidency in the full light of day will accomplish much, much more.