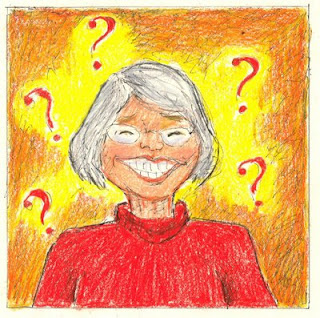 That was the slogan of an old time bandleader from the 30s. His name was Ted Lewis, who was from Circleville, Ohio, where there is a museum dedicated to him in a store front on the main drag. This slogan and a top hat were his signature. He played the kind of music that old people liked: Guy Lombardo and Lawrence Welk-ish stuff. I think his slogan was aimed at the state of the country at that time, to distract people from the reality of the Great Depression, as it is now called to differentiate it from what we're experiencing now.
We put great importance in "happy" in this country. I mean, the pursuit of it is in the Declaration of Independence, isn't it? When you think of all the melancholy immigrants who left home to come here, I guess happiness was as good a draw as streets of gold in their imaginations. There are best seller self help books promising happiness (through wealth, success, love), TV commercials full of happy looking people, happy talk on news broadcasts, etc. In spite of that, why is it that Happy is the one Disney dwarf that nobody can remember when they try to list all seven?
I have been thinking about the word "happy" lately and what it means. I don't think a normal person could live in a sustained state of happiness. If asked the question, "Are you happy?" most people would answer, "Sometimes," or "About what?" I have come to prefer the phrase "a sense of well-being," because you know when you don't have it and when you do have it. I am going through a time of not having it. That doesn't mean being depressed, just that all's not right with my world at the moment. I know it will eventually be all right again, a bit like the current economy. It's one of those cyclical things, I guess, brought on by a glitch in my physical well-being. 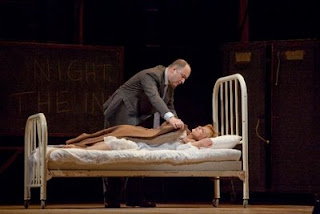 One of the bright spots which gave me a temporary lift was the most recent HDTV opera broadcast last Saturday. It starred two of the most charming, witty and vocally gifted singers, Natalie Dessay and Juan Diego Flores who were so great last year in "The Daughter of the Regiment." They did "La Sonambula", which is basically a very silly story about a sleepwalking girl and her jealous fiance. It's funny and the music is beautiful. I am amazed at the genius and cleverness of set designers. This year there have been the most stunning sets which are almost like characters themselves.

Also, singers are now expected to be like athletes. In one scene in this opera, the two singers are standing on a bed which is being twirled around by a couple of hefty guys, while the singers are doing a very intricate duet. I am waiting for either one of them to fly off in all directions, but they managed to do the singing and the balancing - you hadda be there. It was amazing. Later the sleepwalking soprano had to walk out on a very thin looking section of the floor which slowly moved out over the orchestra pit, singing her head off ( in the story she's supposed to be on a swinging bridge - I guess the set designer couldn't quite manage that.). She was then joined by the tenor, and while I waited for both of them to pitch headlong into the cello section, they were joined by a rather large mezzo, creating a lot of dramatic tension unforeseen by Belini, I'm sure. The old days when the singers just stood in place or moved stiffly toward each other while belting out their arias are long gone, I guess. It was great fun to watch and wonderful to hear. Next year they are doing 9 of these HDTV transmissions, including my favorite "Der Rosenkavalier." Good times.
Posted by Guenveur in Kent at 6:04 PM

Your blogs get better and better! (if that's possible). I'm so HAPPY that you continue to post them! You always were the 'clever' one!
Yo sistah

I know full well about that feeling of not being happy - not necessarily depressed, but a sense that all is not right with one's world. Been there, done that, still kinda going through that myself.

I'm sure that all will be well in time. Things usually run in cycles, I've found.
Yo Daughtah!