The Kindness of Friends 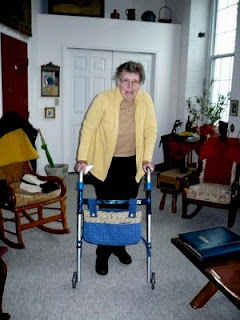 This is Harriet. She will soon be 88 years old. I have known her for over 40 years. She has been a community activist for even longer. She started the Kent Environmental Council, served on the boards of a number of non-profit agencies and has twice been a delegate to the national Democratic political conventions. She reorganized the local Democratic Party when it was being strangled by political bossism. For the last two years, she has had to use a walker to get around and had to give up driving because of hearing loss and general aging.

A while ago, I asked another friend who lives in Philadelphia if she could possibly make some sort of bag my friend Harriet could hang on her walker to carry odds and ends around her apartment and on her trips to the library (which is across the street from her apartment) or when she picks up a few things at the natural food store nearby. This Philadelphia friend is a demon quilter and one of the most generous people I have ever met. She made me a beautiful quilt last year out of the blue. She makes quilts for people 's babies, for newlyweds, graduations, and just for the heck of it. I call her the Quilting Addict, which I mean in only the most positive way.
Saturday, the mail brought the bag pictured on Harriet's walker. I took it over to her on Sunday and she is just delighted with it. She has already used it to fetch her mail from the post box down in the basement of her apartment building. Since it has rained everyday since she got it, she hasn't had a chance to show it off yet on one of her walks downtown.
Now the Quilting Addict does not know Harriet, but she used yellow and blue materiel, both of which are favorite colors of the recipient. (Actually it could have been orange and purple and it would still have been happily received.) I know this is not the first time my Philadelphia friend has made someone' life brighter with her handiwork, but it is a real treat to see it happen in person.
Posted by Guenveur in Kent at 5:13 PM

Aww, how nice! Nancy had posted about making this, but I didn't know that it was you who asked for it for your friend.

Funny how people are linked in so many different ways.

Have a great day.