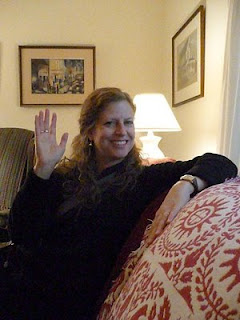 So Emily has returned to Germany for a while. She'll be back, mit kinder, in about 6 weeks for the fantastic, phenomenal Harper Hootenanny down in Dayton in August. Since the older, geezer branch of the family kept talking about a reunion and never doing anything about it, a number of the next generation, a group of cousins, decided to get down and do it. Terry was on of the ring leaders and he and Emily and Jill got busy and put this thing together. Instead of dithering abut dates and locations, they decided to set both and whoever shows up will show up. Terry will be there in spirit, of course. and we'll raise a glass or two of lemonade, Maker's Mark , and chocolate milk to his memory. I hope that a lot of the far-flung family members will make it. Many of us were together in Indianapolis for Terry's memorial service and celebratory party, of course. Emily was the only Burnell present for the party, which she said was perfect.

When she returned to Kent, there was shopping, lots of phone calling and friend visiting and some good meals. The Euro is so strong and the dollar so weak, that she couldn't resist a few sales. I took her up to Aurora Farms, a large discount center full of major stores featuring good buys. When she comes back in August, I am sure her older daughter will have a fine time there. If shopping is genetic, I know whose DNA is loaded. Unfortunately, Dada will be staying home to supervise the remodeling of their apartment. There'll be a lot of Skyping.

Our farmers' market is up and running. There are a surprising number of fresh produce stands already: lettuces, beans, strawberries. There are also more vendors than ever before, with flowers, baked goods, coffee, soap, honey and maple syrup. There's live music - acoustic folk and soft rock. It's a lovely way to spend a Saturday morning, with a stop at the Backerei for croissants and a good coffee afterwards. The Backerei, which has an umlaut over the "a", is a bakery started by a former high school German teacher. We encourage people to patronize his place because it's one of those small shops which give a pathetic downtown like Kent's a little lift amongst the bars. Last year Emily sent him a cap from Erding, which he wears proudly every day. He works hard and his chocolate croissants are a wonder.
Posted by Guenveur in Kent at 3:57 PM

I'm already counting the days until my return, and looking forward to that fabulous Ohio corn on the cob!