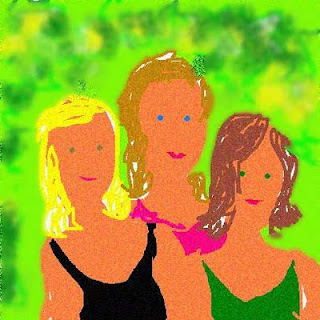 Yikes! Summer is a goin' out and I haven't even posted an entry for August. It all started when Emily, Katina and Elena arrived in the U.S. of A. First I had to dust behind the furniture, buy a new kitchen sponge, wipe away the cob webs in the hall, alphabetize the canned goods, color coordinate the dish towels and perform other household tasks that can go unnoticed until company arrives. (What I really need to do is rent a dumpster and throw out the accumulations of 46 years in this house.) The thing is unless the mess is absolutely egregious, no one notices any of that stuff anyway.

So into my semi-clean, semi-neat house, the three lovely ladies arrived un-jetlagged, since they had spent the first few days in New York. The young ladies are taller than when I saw them last, two years ago, and still beautiful. It has been a whirlwind of activity for a couple of weeks, since there is an awareness that Emily is back in town and phone calls arrive almost simultaneously with her coming in the front door. The girls are now old enough to wander about on their own, mostly to a couple of favored coffee shops. I kept my studio free so they could draw (which they do beautifully) and peruse books and just lounge.

The main reason for their coming was the Harper Hootenanny, held in Dayton. This was a reunion planned by the cousins, originating in the Hofbrau Haus in Munich, when Emily and Terry decided that the Harpers needed a reunion. They generated an email list of all 26 Harper grandchildren and sent out the word. Despite the initial enthusiastic response, we were missing about 60 or s0, with some of the West Coast, Alaska and New England relatives unable to make it (even though Emily CAME ALL THE WAY FROM GERMANY!!) And sadly, we lost our dear Terry in June, but his parents and his family, Lee Ann, Dale and Jace were there.

All of these people are the issue of May and Sid Harper, which is pretty amazing. I mean, what a crowd! I don't know how many of us are still Catholics and how many of us are atheists, but the lack of birth control from a couple of generations really caused a population explosion for a while. We are all quite fond of each other and had a wonderful time. There were a couple of nephews I hadn't seen for ages, whose children are now grown. There are a tribe of adorable little ones, the youngest of which is 4, all blond and movie tyke gorgeous. They were like a flock of puppies and I loved watching them. We all welcomed Jill's new husband, who seemed not a bit overwhelmed. The Dayton and Cincinnati Harpers all brought edibles and drinkables, including Paul's delicious home brew. I heard that at one point some Maker's Mark was hoisted in toasts to the spirit of Terry.
I took my little Flip video camera and interviewed many of the participants and intend to make a family documentary if I can figure out how to edit it coherently, so I can cut out the shots of my feet. Still photos are being downloaded onto various Facebook pages as I write. There is talk of trying to do this again with hopes of increasing the participants.
The amazing Jill Harper Collett was the major planner, managing to put this all together AND running off to the Rockies to get married AND buying a new house AND planning to move just about all at the same time. Brother Mike and wife Marian ended up having a lot of us descend on their home periodically during the weekend and managed to make everyone feel welcome. They have a lot going on in their lives right now and I hope they are getting a good rest.
So that's what I've been up to and why I have not added a post for such a long time. Emily leaves for Germany on Monday and John leaves the same day for a conference in Colorado, so the house will feel REALLY empty. Dupree and I will have to muddle through. 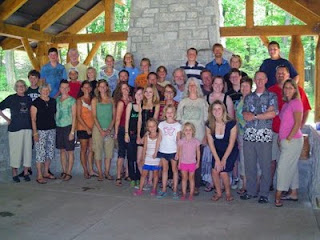