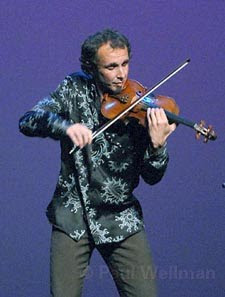 The New Yorker of August 31 has an article by Alex Ross, their music critic, about embellishment by musicians, historically and currently. He mentions the cadenza, that event in the concerto, particularly, where the soloist can show off his/her ability to improvise, or in most cases, stray from the score using the composer's own invention. He mentions a couple of YouTube examples of whist he calls "full cadenza craziness." I checked them out and just have to share them.

The first is from a violinist called Gilles Apap, who both looks like and plays like a Gypsy, having his way with Mozart's Violin Concerto. Check this out.
The other is Alfred Schnittke, being not quite so crazy with Beethoven. The Apap performance is on video and you can see that some of the musicians Are Not Amused. I think it's pretty cool myself, even though I love both of these concertos. The Cleveland Orchestra concerts start soon and I would love to see/hear something like this once in a while.
Posted by Guenveur in Kent at 6:34 PM