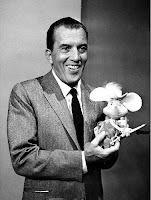 Years ago, before VCR or Tivo, when television was "live", Sunday nights were the nights for watching the Ed Sullivan Show. In spite of the fact that Ed Sullivan was one of the clumsiest hots ever, it w2as a terrific variety show, which brought all sorts of wonders to us out here in the spaces between New York and Los Angeles. We could see the stars of Broadway shows doing a complete number from a hit musical: Julie Andrews, Robert Goulet and Richard Burton from "Camelot," for instance, and Paul Lynde singing the Ed Sullivan anthem from "Bye Bye Birdie." We could see Rudoph Nureyev and Margot Fonteyn doing a pas de deux from "Coppelia." Itzak Perelman, as a child prodigy appeared, too, as did Isaac Stern. He introduced some of the great comedians, like Stiller and Meara. Of course one of the biggest TV debuts ever was the first performance on American TV of the Beatles, featuring hundreds of screaming teen aged girls. (A charming, funny little movie was made about that, called "I Wanna Hold Your Hand", which is worth seeing.)

Among the more unusual and old fashioned acts were Senor Wences, with the head in the box - "S'all right!" - and Topo Gigo. There was some guy who would spin dozens of plates on slender sticks, Myron Cohen with his old Jewish lady jokes, Frank Gorshin the impersonator, and a comic dog act featuring a dog who only stared at his desperate trainer as man tried to get the animal to do tricks. I think this part of program was like the vaudeville shows that my grandparents' generation had enjoyed back before movies killed them.
One of the old vaudeville acts that never failed to make me laugh aloud was that of Mr. Pastry, a British music hall performer, whose schtick consisted of a demonstration of The Lancers, an old fashioned group dance popular at grand parties. Dressed in white tie and tails, with white gloves, he would dance alone, but make you see the whole company. He was on probably once a year, and that''s the only thing he did, but he did it perfectly. I had forgotten his name, but I came across it in a memoir I was reading and immediately found him on YouTube. His real name was Richard Hearne and I rather doubt that he's still among the living. Some people reading this may remember him. This is only a little clip, but it still makes me laugh.
I 'm sure that the entire Ed Sullivan show is archived out there. It was not always memorable, but there were moments that I still remember. It is nice to have Mr. Pastry available to watch again.
Posted by Guenveur in Kent at 4:22 PM

a few years ago one of my brothers gave me a dvd set of "best of" Ed Sullivan ('cause I'm older than he is and he wanted to remind me of it!)

today's word is: foloopli -- one of the best yet.