Days to Remember in February 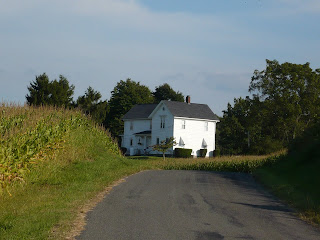 For the past month we have had the sort of weather I dream about when the winter days are gray and the earth looks dead. The skies are blue, the temperature is in the low 70s and the sun is golden. The leaves are still brilliant green as the sun shines through them. Late summer has become almost my favorite season; there are still flowers, the markets are full of wonderful local fruits and vegetables. Even though parts of my garden look creepy, I still have plenty of fresh herbs and healthy tomatoes and green peppers.

One of summer's pleasures which is still enjoyable is the ice cream stand down in New Baltimore, a crossroads hamlet just over the southern border of the county. There used to be two splendid antique shops there as well, but only one is left., and I don't need any more "stuff," anyway.

Although the place is on a main route, I like to go on the back roads through some lovely farmland. There's one place which, in early summer, had the most gorgeous garden right by the road. In June there are huge bright red poppies, iris and all kinds of roses. Last year I stopped to take pictures (which I have unfortunately erased) and the people came out and showed me around the back where they actually had some opium poppies which the man said his mother had started many years ago. Since I so admired their garden, the man picked me a selection of the most beautiful roses I've ever seen. he told me the names of them, but I don't remember. A few weeks later I stopped back with a painting I had done of one of them as a thank you gift.

The ice cream stand in New Baltimore is very popular because the ice cream is handmade and the flavors are unique. They also put eyes on top of the ice cream for the little kids, which I guess I could ask for if I wanted to. Nothing like having your ice cream staring back at you before you lick it. One afternoon this summer a group of antique car owners made a stop there during one of their rallies, so the parking lot was full of gleaming old beauties from the past. Motorcyclist roar in frequently, too, with their tanned babes on the back. It's also a popular stop with county fair goers, too, since it's on the same highway a few miles away. Even when it's crowded, they're very efficient, so you never have to wait long.
In the past couple of years, they have duded up the place, adding a vine covered arbor to sit under while you slurp. This year they are going to stay open a little longer, which will be nice for the leaf peepers in October. I'll probably get a couple of visits in before it closes for the year.
Posted by Guenveur in Kent at 12:01 PM