Fit For A Boa Constrictor 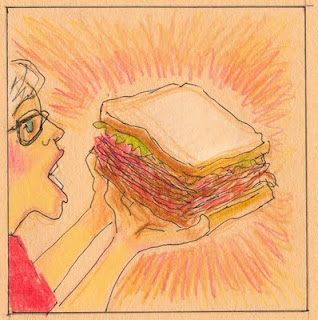 I realize should be contemplating the meaning of life or the state of the world, but I am not. My mind focuses on trivia, only some trivia looms large in life at times. My current concern is the size of sandwiches. For most of my life, a sandwich was something between two slices of bread: peanut butter and jelly, or a piece of baloney, ham. or roast beef, with maybe a bit of lettuce. These sandwiches were held in one's hands, stuck together without the aid of toothpicks and easily eaten by the normally jawed. One would occasionally get a triple-decker BLT at a nice tea room sort of place, delicately divided into fourths and skewered with cellophane tasseled toothpicks. It could be a job to keep it together long enough to convey to the mouth, but it was not impossible without dislocating the jaw .For the past decade or so, however, sandwiches have become towers compiled of layers and layers of meat, cheeses, and lettuce. Unless one has jaws hinged like unto a boa constrictor's, it is almost impossible to bit into one of these things.

Recently, for instance, a friend and I, having rambled around in Amish country, stopped for lunch at a nice hilltop eatery. (It was not Amish, although there were a few young Amish women amongst the wait-staff. ) There was an interesting looking sandwich on the menu and we were able to persuade the server to let us halve it, knowing we would be unable, as geezers, to eat a whole one. When it was brought to the table, each half on its own plate, we were confronted with this 5 inch high creation, stuffed with lots of lettuce, thick bacon, tomato and turkey. It looked delicious, bur we were forced to use out knives and forks to cut it into manageable size. It took forever. We really didn't need that much food. I could not imagine anyone eating the whole thing without developing some terrible jaw condition. (And along with the sandwich and a cup of soup, the waitress brought little biscuits with cheese baked into them. At least they were the right size to bite into. )
I am not sure why sandwiches have gotten so huge. But then Americans have also gotten huge, so there must be a connection, no? There's enough stuff in the average restaurant sandwich to feed a village in Upper Volta, or whatever it's called these days. So I guess I am thinking of the state of the world after all.
Posted by Guenveur in Kent at 12:54 PM

yes, yes. yes!! Maybe they're making jaws bigger now and the inability to open wide enough to bite into today's sandwiches is yet another annoying symptom of geezerhood.