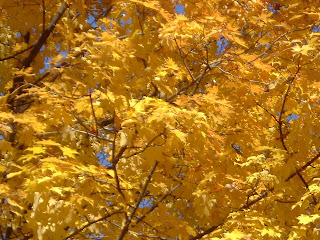 Right now it's raining, but last Monday I took my friend Harriet, who can no longer drive, up to Geauga County, where the trees color up earlier than here in Portage County. It was a cloudy day, but the colors were still brilliant.

We drove through a rather isolated Amish area, where even on a cloudy day, clotheslines were loaded with washing - Monday is still wash day there. I don't envy the life of an Amish housewife. Depending on the sect, there is no electricity and laundry is done on a wash board. They do have manual wringers. There weren't many buggies out that day, only a few carts driven by farmers.
I have heard that the Amish in Geauga County are more conservative than those down in Holmes County, which is overrun with tourists this time of year.
That's where my friend and I had the enormous sandwich a while back. We had gone to the community of Berlin to see "Behalt" at the Mennonite and Amish Historical Center. It's a huge cyclorama, painted by a German artist who was fascinated by the Anabaptist's. He came to this country and offered his services to portray their story. It is a history of them from the very beginning, telling how they split from the established church over infant baptism. There were two leaders who arose, one named Mennon and one named Ammon. They went through draconian persecution and ended here in land that resembled their home countries (Germany and Switzerland) with lots of arable land and rolling hills. Ohio has the largest population in the country. The woman who narrated the cyclorama for us had a slight German accent. She told us she didn't speak English until she was 6. She's no longer Amish, and had contributed some of her clothing to the costume exhibit at the center. Cool!
But I digress. On this trip, we stopped at a little diner in Burton, which is a maple sugar center. And, and we each had a real sandwich in this little place, one that was the right size, the kind I would make at home, the kind a person could hold in one hand and eat. And it was delicious. It was a very nice afternoon, even though cloudy (which Harriet kept complaining about as she is wont to do.)
I shall have to miss the next couple of farmers'markets because I am taking a class in pastel paining which started out on Wednesdays but had to be changed to Saturdays on account of the iunstructor got a real job. It's a great class and I am learning a lot. But I hate to miss the market. And pastels are messy.
The picture above is the maple tree in my front yard and is from last year. Hasn''t turned yet, but when it does it makes my whole living room glow golden.
Posted by Guenveur in Kent at 6:43 PM

In Lancaster County, the Amish do laundry on a less rigid schedule and one of my favorite things to see is the Amish wash hanging on the line. I get all goosebumpy over it.