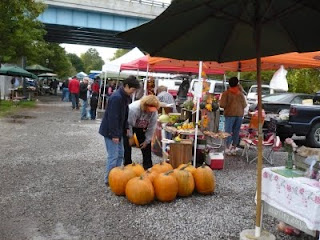 We only have a few more weeks left. When this market started a number of years ago, there were maybe 5 or 6 stalls and only a hew shoppers showed up. Now it is packed with vendors and buyers. It's the place to be on Saturday mornings and I love it. It's what this town was like years ago, when our downtown was full of shops, the sidewalks were crowded, and you could hardly walk a few feet whiteout running into people you knew. Ohioans love malls, so many were built and that's where people went and our local shops went out of business.

But now, starting in late June, like Brigadoon a little mini-town appears and stays until the end of October. There are still vegetables to be had: squash, kale, radishes and potatoes. Starting last week, there are lots of pumpkins and mums. There was a new food vendor this week selling hot soup, just in time for nippy weather. I bought potato garlic and it was terrific. One of my favorites is Gaelic Imports, which sells pasties, sausage rolls and little cottage pies. A favorite of everyone there is Rafael, the Spanish baker. He makes wonderful breads. He said he even used to grow and mill his own wheat, but while it was an adventure, it was just too time consuming. There's a young man who bakes and sells cookies which are quite varied and good. One woman makes organic dog treats, but nothing for cats, so I can't buy any of her wares. I haven't checked to see if there is any catnip seller, but I bet there is.
We have a couple of goat farmers with all sorts of gourmet cheeses and feta. I buy my face soap from a young woman who makes the best herbal soaps that feel like cram on my face. I don't think it has had any effect on the wrinkles, but it certainly feels good and it smells heavenly. Everyone loves the garlic man and his two dogs, who sit in the bed of his truck and smile at people. He said it was not a good garlic year, but he also had shallots and fancy onions this time. 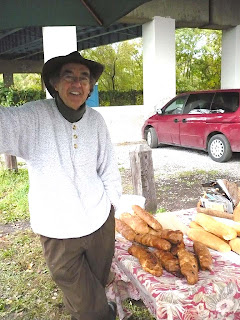 rom some of Kent's best folk musicians. This week I happened to run into a fine folk singer I know as she was talking to the musician on duty and I said. "You should be singing here." They conferred briefly (they've worked with each other before) and did a rousing number together, so I threw some money into his guitar case. (The folk festival happens next month and they'll both be performing.) World renowned composer Halim El Dabh was strolling about looking like an Old Testament prophet, wearing one of his African robes and using a long walking stick like Moses. He has performed there in the past. He and Rafael, the baker, are two of the most charming men in Kent and have quite a good time flirting with women of all ages.
Last year, some of the vendors had an indoor Christmas market in a big unused business garage and I hope they do it again this year. Our family has decided that we all have too much "stuff" and are planning this Christmas to give only things that can be consumed rather than objects which take up space,, so this is the kind of place to find those things.
Posted by Guenveur in Kent at 1:29 PM

Well, I just loved your farmer's market blog. Wish I was there. I sent your address to Carol Arnold, having recommended KentKapers to her at lunchtime today. She will love this latest post.