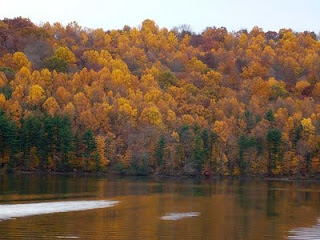 The other day, I took a ride down to Tuscaroras County, which is about 70 miles south of here. There's a place I like to go every few years, mainly in the spring or fall. It's called the Moravian Trail. Back in the late 18th century, a group of religious Moravians established settlements in that area: Goshen, Gnadenhuttan and Schoenbrun. They converted the Indians and set up peaceful agrarian villages. The Moravians and their Indian converts were massacred by the British and the villages they founded have been restored and are part of the state's historical sites.
None of these settlements is on the Moravian Trail, so I have no idea why it bears that name, except that it may have been a path they used for some purpose. The whole area around the trail is now part of the Muskingham Conservancy District, a series of lakes formed as a result of flood control dams built in the '30s. The trail itself runs along a wooded ridge and encompasses 55 miles of absolutely gorgeous territory., The views are breathtaking, especially now, when the trees are a glory of color.
The section I drove is about 25 miles long and runs from a little town called Dennison, up hill and down and around many curves and ends up at Tappan Lake down at the bottom of the ridge. Abut halfway to the lake is a little town called Deersville, in which is a general store which has just about anything you might need in the hills or on the lake. There's a touch of "Deliverance" about it, at least in the folks who hang out there, big bellied men. I like to stop there for an ice cream cone or a package of chips. One of the men was talking about a big buck he had seen in a field that morning. He didn't want to say where the field was because he was going hunting and had his eye on it.
There are some beautiful old houses in the village, some of which have been fixed up by outsiders who come down to enjoy the peace and quiet. I know a couple of folks who have cabins down there which they escape to occasionally; in one case a literal log cabin, of which there are a number scattered about. I don't' know those people well enough to have been invited, but I'd love to see it. So far as I know they've never been tied to a tree with their pants around their ankles, but it seems to be the sort of place that could happen.
It's a lovely place this time of year, especially without dueling banjos and I'm glad I got to see it before the trees turned bare. In the spring it's also lovely, since thee are a lot of flowering trees and wild flowers. When I stopped to take this picture of the lake, the water was absolutely still, like a mirror, which was why I wanted to take a picture of the tree reflected in the lake. Suddenly there was some sort of disturbance under the water by the far shore and these ripples starting fanning out toward the shore where I was. I didn't see anything, but whatever it was made quite a strong current across the lake. It was a tad creepy.
But then it's almost Halloween.
Posted by Guenveur in Kent at 4:06 PM