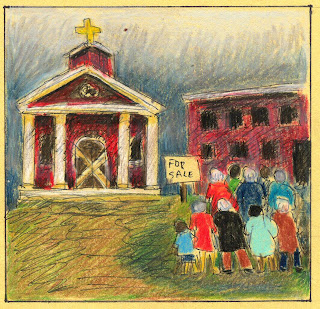 I have been reading a lot in the area newspapers about the consolidation of Catholic parishes and the closing of churches. There have been sad interviews with mostly older parishioners. These are people who were baptized, made their first communion, confirmed, married and their parents and grandparents buried from these churches. In large cities like Akron and Cleveland, most of these parishes were established in the late 19th and early 2oth centuries by immigrants from Europe: Italy, Poland, Germany, Slovenia and Hungary. They built magnificent churches, which became the centers of their communities, along with the schools they built to educate and "Americanize" their children and inculcate Catholicism, of course.

In some of these churches the mass was said in the language of the parishioners. (I attender a church in Berea where Polish was used for the mass and for the sermon.I never knew what was going on. My favorite story about that is that one day after mass I asked a woman I had seen every Sunday what the closing Polish hymn , which sounded very martial, was about. She said, "In don't know. I'm a convert.")
We never happened to live in an ethnic parish, mostly WASPY kinds of churches. We always attended parochial schools from first grade through high school. Aside from high school, our parish schools were pretty much neighborhood schools. It was like being in a large extended family, with a few crazy aunts thrown in (some of the nuns). Our parents were involved in church activities unrelated to the school - altar society, choir, that sort of thing. It was a strong part of one's identity. I have good memories and some not so good mostly related to the crazy aunts. They were great for English grammar, literature and history - except when it came to the Reformation. In my high school there were no art courses, drama or music classes, aside from the chorus, run by Sr. Margaret Angela, who had a voice like a steam whistle, causing dogs in downtown Springfield, Ohio, to howl in misery.
I am no longer a church goer, but I remember the sense of community engendered by belonging to a parish, and empathize with those people who are now forced to leave the places that fostered them and nurtured them throughout significant moments in their lives: birth, marriage, and death. The children and grandchildren of the founders are now in the suburbs, attending churches that look like shopping malls. The bricks and mortar buildings of their forefathers will stand empty, be razed or converted into some other use. It must be like losing a limb. You still have the rest of your body, but you will always be aware that something is missing.
Posted by Guenveur in Kent at 2:41 PM

Lutheran churches in Philadelphia are closing, too, and people are grieving. It is a very sad thing.

Word Verification: Monise, another one of those French impressionist painters, lesser known than the others