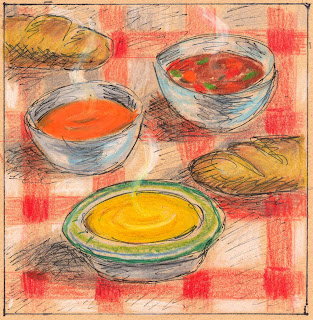 For Christmas last year, my son John gave me a big slow cooker, one big enough for roast beast. I had a small one which he had also given me years ago with his paper route earnings, which I have used mostly for beef stew. Now I have one big enough to make a delicious pot roast with nice brown potatoes and carrots. This also results in a lot of gravy and general meat juices with which to make great soups.

One favorite is mushroom barley beef soup which is ever so good for one , with all that barley. If I throw in a little sherry it's even better. And if you have a glass of red wine, then you have an even healthier meal, since we all know that red wine is good for the heart, or arteries.
The other day I made the best vegetable soup ever. I had enough leftover potatoes and carrots to dice and added onions, broccoli, tomatoes and shreds of leftover pot roast and a little barley. It was very rich and almost stew-ish. With a good salad and crusty bread it was a very filling dinner. And a glass of red wine, of course.
John's girl friends' mother (I love serial possessives) gave him her recipe for butternut squash soup. He has made two batches so far. It's quite labor intensive and requires baking the squash, and lots of processing the pulp in small batches. It has fresh ginger and other spices and is very delicious. Her mother adds apricots, but John hasn't tried that yet. I found recipes online that are similar., which is where I found the directions for the following experiment.
I am not a squash person, but I found some of those really picturesque acorn squashes at the last farmer's market and decided to make soup with them. I had no idea they would be so hard to cut in half and at first I had the feeling that my best knife would be stuck in the first one forever. I finally gave it a good whack and it fell apart, so I whacked the other two successfully and put them into the oven to bake. An hour later, I opened the oven door and recoiled in horror. It looked as if I had baked a bunch of giant beetles. They gleamed like scarabs in a truly yucky fashion. Since they didn't crawl toward me, I removed them and let them cool in thier own beetle-y way. Then I had to peel them and dispose of a bunch of dead beetle skins. Ewwww!The soup turned out quite well. The recipe called for half and half, which I had on hand for coffee use. If I ever make it again, I think I will add sour cream or buttermilk instead.
One of John's clients gave him a beautiful pie pumpkin from which he has made two pies and has enough left over to make another - or perhaps pumpkin soup. It's been a very squashy fall. Soupy, too.

LOL at the beetles. I use my crock pot a LOT. I bought it in 1971, prolly the same week I met you, actually, and it is just now starting to fall apart (literally). I've got a new one in a box but don't quite trust it yet. I like to take 2 pounds of beef cubes, a can of cream of something soup (usually mushroom but chicken is equally splendid), a half a soup can of left over red wine and throw it all in the crock. Come home to a lovely aroma. Serve it over noodles.

crockpots RULE!!! i have three ... no, four, if i count the itty bitty one that is great for warming up leftover soup while i'm away for the day - i walk in the door and it smells like dinner (because it IS dinner) ... and i agree - acorn squash DO look like bugs - i microwave mine for a few minutes to get the skin a little soft before i try to whack them in half - and then i bake them skin side down after poking the meaty part with a fork and filling the center hole with butter and brown sugar and cinnamon - all that good stuff bakes into the squash and tastes like dessert instead of veggies