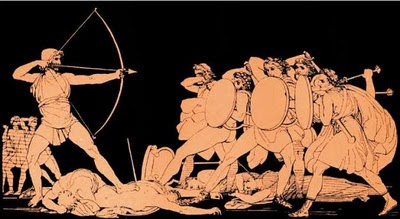 For no particular reason, I have taken a break from modern books and have dived into Homer. I've had these books sitting around for years and decided it was high time I improved my cultural literacy by actually reading this stuff. It's a rather old translation (1907) and I am sure that scholars have come up with something more accurate since then, but they read like a fast-paced adventure novel. Oh, the language is archaic, in the biblical sense, but I am really enjoying it.

First I read "The Odyssey," and now I am going through "The Iliad," which is bass ackwards in chronology. Ulysses' story is much more interesting, because it involves travel and all sorts of different characters, monsters and ordeals. He goes through so many trials and somehow, with the help of a god or two, eventually manages to get back to his faithful wife and son, who have a few adventures of their own. Poor Penelope is besieged by the Suitors and somehow can just tell them to take a hike (after all, Ulysses may be alive after twenty years, but then again, maybe he isn't), so when Ulysses gets back he has to deal with them, too. (I had a great-great-uncle whose middle name was the French version of Ulysses - John Ulysse Guenveur. He died young and didn't have any adventures that I know of.)
"The Iliad," on the other hand , is just one battle after another, with armor clanging about the losers. There are a zillion brave men who are always challenging one one another during the battle of Troy, on account of Paris took off with Helen, the wife of Menelaus. It's very bloody, with spears piercing armor and flesh and the odd beheading on every page. And there's a rather hilarious episode about this sea goddess pleading with Zeus to intervene for her son, Achilles, who has been dissed by Agamemnon over some babe that he (Achilles) had brought back as spoils from invasion he had led. Well, Hera, Zeus' wife, gets royally ticked off when she sees Thetis, the sea goddess, clasping the knees of Zeus and there's a very modern sounding spat between the god husband and his goddess wife in which he asserts male superiority. I guess it's a really old story and no wonder men have had such a hard time letting go of that archaic idea, if they ever have.
I like how chatty the gods are with mortals, rather like the Bible stories of God chatting it up with Moses and Noah. And I like how the people in power are always offering golden chairs, barrels of wine and chariot horses as rewards to strong, brave MEN (of course) who do them favors. And there is much wine drinking, ox roasting and chine eating being done. Story telling, a la the parables, is a favorite device for teaching the recalcitrant warrior why he should face the more heavily armed enemy. I am over half way through it and the armor clanging is ringing in my ears. Apparently it didn't do much good anyway.
When I was a kid I had read "The Aeneid" and loved it. I remember the illustrations included bare breasted Harpies, and in these books are some great illustrations similar to the sort of things you see on Greek vases, and many of the men are stark nekkid. I mean there will be a bunch of guys wearing robes, and the main hero will be absolutely nekkid. Why is that? I must admit that my knowledge of ancient Greek clothing or lack thereof is pretty much zero, but I have to assume that there was a reason for the nekkidness. I guess things could get pretty hot in those islands, temperature wise. Or maybe they were just a bunch of exhibitionists.
By the way, that illustration is of Ulysses offing the Suitors.
Posted by Guenveur in Kent at 1:46 PM

The day we left Athens it was 126 degrees. Fahrenheit.

So that explains the nekkidness? Did you follow suit - or non--suit?

Katina told me awhile ago that the Ancient Greeks did the Olympics in the nude as well. I felt downright prim on my trips to the Greek Islands as I tended to wear bathing suits to the beach...

WV: suphar, maybe this is the Greek way of saying "suffer", you know, all that war like stuff and all that!