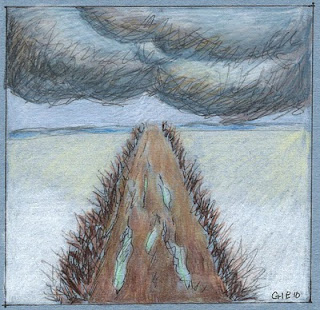 February - hard to spell and hard to live through. Fortunately, I am not one to suffer from S.A.D., but I can empathize with those who do. Up here in the northern hemisphere, we suffer from sun deprivation, blue sky deprivation and warmth deprivation. It's gray and it's damp and everything is dead: the trees, the grass, people's faces. The traces of dirty snow make everything look desolate, trashy, forlorn.

Another depressing aspect of this month is that Lent starts, which brings back dreary memories of marching around the church to the Stations of the Cross while the priest droned on about how our terrible sins (like sassing our mother) drove the nails even deeper into the hands of Jesus, along with the mournful strains of "Stabat Mater," accompanied by the occasional bonk on the head of a disrespectful (i.e., yawning) student by one of the bead-rattling nuns. Even Easter candy couldn't make up for the dismal effects of those deadly six weeks. Even though I was living in Georgia at the time, it was still gray all the time in February during Lent.
On my computer desk top is a picture I took in August of a gleaming white farm house under a blue, blue sky beyond an elephant's eye high corn field. It was on the way home from the New Baltimore ice cream stand. It's great to look at and think about.
I know one should live in the moment, but it's hard not to look ahead. A local Catholic church has the best fish fries every Friday during Lent and you don't even have to sing "Stabat Mater" while you're waiting in line. Pretty soon the pancake breakfasts will start up in the maple syrup country north of here. And having been so deprived, we appreciate more the coming of springtime, when all the ugliness disappears and we can bask in all the beauty we have longed for during February.
And we don't live in Haiti and shouldn't be complaining anyway.
Posted by Guenveur in Kent at 12:28 PM

Funny post! Chris is in Australia now, where it's in the 80s. But raining.