The Passing of Holden 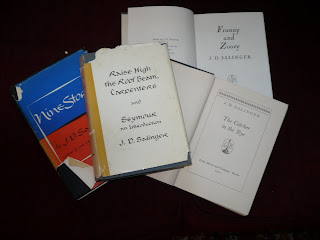 A couple of years ago I re-read "Catcher in the Rye" and commented on it in what was then my new blog. Having read it caused me to talk "rather strange" (as my great-great- grandmother commented in a letter written at the end of the Civil War, in reference to a returning soldier who had been shot in the face and lost part of his tongue. )Not that reading CITR cause me to lose part of my tongue. It's just that a person picks up the language of Holden and all. It's just goddam hard not to, if you want to now the truth. By the way, a few years ago a very Holdenish movie came out which is worth checking into if you like disaffected prep school boys: "Igby Goes Down." Sad and funny.
Well, J.D. Salinger died yesterday, and even though he had not been seem or heard from for a hell of long time, it was nice to know he was still in the goddam world. We'll miss him like a bastard, I mean it.
I have a collection of Salingeriana: books by and about him. I had read all the short stories and the Glass family saga in the New Yorker over the years. Actually he had written for the Saturday Evening Post for years before he shot to fame with Holden. My daughter Polly found a collection of these stories which had been published in a paper back book semi-illegally, which had pissed off J.D. like a bastard. Some of those stories pre-figure both Holden and a Glass or two, as do a few of the "Nine Stories" stories : both Seymour and Walt are there in "A Great Day for Banana Fish" and "Uncle Wiggley i n Connecticut." The saintly genius child is at the center of "Teddy," a rather frightening sibling rivalry tale in the Glass vein.
I don't' know why I loved the Glass family stories. They were the kind of people who could not stand the world and ordinary people, unless they were child people or poor people who couldn't help being sort of dumb and all.
I think that fascination with unique families has run through history (the Medici), literature (the Forsythes), theater (the Barrymores) media (the radio Barbour Family - if you're older than 70) and movies (the Royal Tannenbaums). When a family glitters, we all want to know more about them. No family has glittered more than the Glass family, a collection of saintly geniuses, pure and innocent, not just braininess but spirituality like bastards. And all creations of the mysterious J.D. Salinger. Jews don't believe in heaven, thinking that what you do on earth is the important part of human existence and that you should make your life here count for good, but if there is one, I hope J.D. is basking with his creations and having a good time. He's one of the few people they'd actually like and all.
Posted by Guenveur in Kent at 1:52 PM

I love the Glass family, too. I think you relate to them because the Harpers are equally colourful - and then you made your own mini-Glass family when you had kids (if that doesn't come off as bragging, that is).