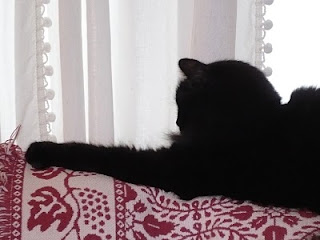 Well, actually, he's not that clever, but I like this Sphinx pose he has lately adopted. (He also has a meat l oaf pose, but then, so do a lot of cats.) His Sphinx pose demonstrates his prevailing attitude : aloof, princely, mysterious. He is currently being aloof toward his food, even though it is the expensive Fancy Feast, featured as a chip dip on a late commercial.

He is princely about deciding to sleep on the table from which he can stare disdainfully at those who attempt to shove him off so we can eat.
He is mysterious when he stares out of the front window, twitching his tail at things no one else can see: no birds or squirrels in sight.
Herman, the errant cat who lives, supposedly, in a house across the street has become bolder lately. His family is breaking up and he must wander over here to avoid the tension. While Polly and Sally were home during the holidays, he crept in at night (through our cat door) and slept in their beds. They think that I should adopt him. So far, I don't know who will get custody of Herman and the three pit bulls (another reason he comes over here), and I hope it's the one who moves out. I cannot adopt this cat, although I must say, he is much more family oriented and affectionate than the aloof, mysterious prince. But Dupree has dibs on this house and our hearts no matter what.
Posted by Guenveur in Kent at 11:12 AM

Have a heart! Take in Herman!