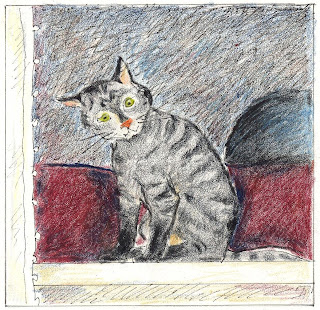 We have been invaded by the cat of a neighbor across the street. This cat discovered the cat door in the basement last year, This cat door was installed by John for his and his own cat's (Dupree) benefit. Dupree had developed the habit, indulged by John, of wanting to go out around 3 a.m. every day. That there was a convenient litter box in the basement, accessible to Dupree, made no difference. All of our cats have enjoyed adventures in Dix's woods catercorner from our house. Other cats could wait until later in the morning, but Dupree likes 3 a.m.

The cat door worked quite well for a number of years, but in the recent past, a number of neighbor's cats have wandered in and been chased out by both me and Dupree. However, Herman, a quite lovely brown tabby, does not shoo easily. It has gotten worse since his owners have acquired a third dog. Herman apparently could tolerate two, but the third has created in him a need for respite - in our house. For a long time, there would be confrontations by the cat who lives here, growling and spitting which sounded vaguely like "Get the hell outta my house!" from Dupree. That has now settled down to a few mild mutterings.
One thing about Herman intrusions, is if I happen to walk into a room where is has sneaked earlier, he announces himself with the eeriest meow I have ever heard from any cat. The closest I can get to describing it is that strange instrument designed back in the 40s by some European genius, which is called a Theremin, which you can hear here. It was popular in horror movies. When that sound comes from a cat, especially one which is hiding behind a couch, it can make you jump plumb of your shoes.
On his his way into the house which takes him through the basement garage, he does a little dance on my car, leaving his paw prints from one end of it to the other. He makes sure all the humans in the house are in bed, eases through the ajar door from the basement, snacks for a bit on Dupree's left over food and then settles into his favorite chair, which also happens to be mine. Of I get up during the night he shoots back through the basement and goes home.
Lately, how eve, as if this isn't enough, he has GONE TOO FAR. I came home from my early morning water aerobics class to see him sitting in the front window! This is Dupree's front window. Dupree had been featured on several of my Christmas cards in HIS front window. And not only was Herman sitting in the window, but Dupree was sound asleep behind him on the back of the couch.
As soon as Herman spotted me walking toward the front door, he shot off the couch and down the basement stairs, leaving the cat door flapping.
We have tried keeping all the doors closed, but that meant that John was getting up at 3 a.m. again. It seems to be okay with Dupree that this cat comes in, eats his food and sits in his window, so I guess we'll just have to put up with it until his owner gets down to 2 dogs again.
Posted by Guenveur in Kent at 4:42 PM

This is toooo funny! We have cat or cats that have made our garage the nightime neighborhood hangout. I don't mind it too much, since we had mice and now we don't; however, we too have paw prints all over our cars. Rick's car (which is stored in the garage through the winter) had a couple droplets of blood and some mouse fur!!

I'm not crazy about all the "free range" cats we have in the neighborhood right now, but then again, they DO serve a purpose.

Poor Herman - if I were a cat and my owner got three pit bulls, I'd be disgruntled, too, and probably look for alternate digs like he seems to have done.

The Burnell house has lately become a magnet for all of the Edgewood cats, as evidenced in Herman's hanging out as well as Satine showing up on the scene. Funny that Dupree tolerates Herman coming in and sitting on the sofa but I doubt he'd EVER let Satine in the house without picking a fight!

Word verification: lothroun, as in, lounging around the house like a sloth!

i do admire your stuff, G. It always makes me laugh!!