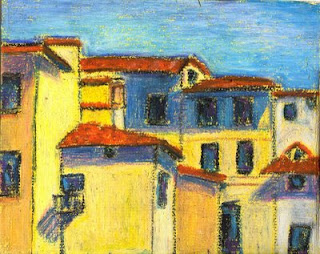 It's been a couple of weeks since the devastating earthquake in L 'Aquila, Italy. Emily said I should write about the wonderful times we have had in Italy and the beauty of the place and the people. It is so sad to think of the loss of lives and the homes that families have lived in for generations tumbled into dust. Italy is like a living museum.

The first time I was there, it was in Florence, the home of the Renaissance where you can walk around where Dante, the Medici's, Michelangelo, Giotto, Botticelli and all the artists, poets and philosophers walked centuries ago. It's mind boggling. Every building in the old part of the city is an architectural jewel. Words can't do it justice.
The next time I was there it was in one of those hill towns in Tuscany, Monte San Savino, a sort of mini-Florence. Chris had rented an old stone villa in an olive grove just outside the town. The view from my bedroom window looked like a painting from the 15th century. We would go into town in the morning for cappuccino and gelato and just watch people. Italian women walk as if they are the most spectacular females on earth..."Look how I do this! Feast your eyes on me!" Of course, when they get old and fat, they are leaning out of second story windows gossiping with neighbors. The old men sit on the steps of the church, smoking cigars and ignoring the women. The buildings are ancient and in use, not torn down and replaced with spit and cardboard boxes. The picture above is a group of residences in Monte San Savino, old and lived in, probably a lot like the houses in L'Aquila that are gone.
We had a wonderful time in this place. The owner of the villa gave us fresh vegetables from the garden. None of us spoke Italian, but Chris somehow understood everything our landlord said to him. We had terrific wine every night and made some excursions to other hill towns like Montelcino, home of Brunelli wine, which we bought because it sounded like Burnell, Castello di Gargonza, where Dante spent some time in exile, and the Chianti area where the wine comes from. We saw a road sign for a town called Trequanda, which made us laugh. We took a quick trip to Florence so I could show them where "Room With a View" was filmed and have some great gelato.
When I read about the earthquake, I thought of this beautiful place and how terrible to lose lives and the beauty of an old town where their connection to their past was with them all the time and now is gone. I remember that there was a terrible, much worse earthquake a number of years ago in Assisi, and how the survivors were living in trailers and wonder how things are there now. I did read about the restoration of mosaics in the church of St. Francis, but I have read nothing about the restoration of homes there. I wonder if the same thing will happen to the residents of L'Aquila. How do you recover from the destruction of your living place? Is is better or worse if it comes from the hand of man or the force of nature?
Posted by Guenveur in Kent at 7:53 PM

What a walk down memory lane. Come back so that we can all go again!