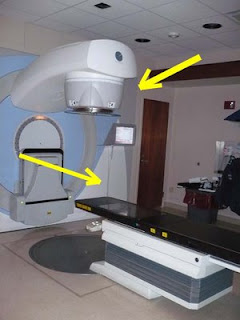 I have now had a week of radiation and do not glow in the dark yet. I also found out from a test that (get this name) Dr. Mumbishir, the oncologist, had run that I am at very low risk for a recurrence of the cancer, so there will be no chemo which I had no intention of doing anyway. I mean how much overkill does one need for a teeny tumor?

I shall have in all 5 or 6 weeks of this radiation. Here's how is goes. You go to Suite 10 in the basement of the hospital annex. Does that not sound a bit ominous, even if it does sound like "sweeten"? "When last seen, she was sent to Suite 10." So you go there and you don't even have to stop at the desk. You go back through a hallway to a little section where there are lockers and a dressing (actually undressing) room. You put on one of those impossible to close gowns that are supposed to tie in the back, but which I cannot manage to do. Then you put your clothes in a locker, lock it and slip the key onto your wrist, just like at the swimming pool back in the day. Then you go into this tiny waiting room with a TV where you can watch Alan Ludden emceeing "Password" and admire his 70s leisure suits. You don't have time to watch anything with a plot, so you just sit there and shout out the answers to the contestants until you are called into the ROOM.
There you state your name and birth date lest they zap you with someone else's radiation recipe. In the picture above is the machine that zaps you. You lie supine on the "bed" which has a nice sheet on it and you fit your head into a mold they made the first time you went to be set up for this. Your arms go back behind your head into stirrups, like the ones that you would put your feet into if you were at the gynecologist. There's an echo of a torture scene about it. Oh, before that they have removed your arms from the gown, thus exposing your upper body to anyone who happens to wander thought the room. Well, no one has done that, but each time I go there seems to be a different guy assisting the technician.
When you are all settled and half nekkid, the big round thing at the top (see arrow) swings around over you (see arrow on the left). The techs get the hell out of the room, lest they be accidentally zapped. There are a few beeping noises and it's over in about three minutes. While you are lying there you are also trapped into listening to their choice of music. One day it was "This Diamond Ring" which I had a helluva time getting out of my head for hours afterwards.
Everyone there is very nice and they always have a big bowl of candy in the waiting room, even though so far it has been Lent. Fortunately it's only abut a 15 minute drive from home, so it doesn't take up too much of my time. It's almost like having a short, part time job that you have to be at every day at the same time, except on week-ends. I can do this.
Posted by Guenveur in Kent at 6:53 PM

Of course you can do this. And keep giving those guys their thrills for the day.

WV: teedes, which obviously is what them guys are calling your radiation receptors!

Auntie G, you go girl!!! Nice blog except that liberal Democrat reference. Hope all is well with you. Anti government, John.