My Son , the Stone Man 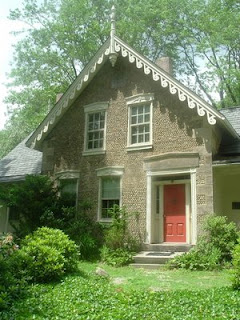 I am proud to announce that John's work as a stone mason has been recognized by two separate preservation organizations in Ohio for his restoration work  on an old cobblestone residence in Aurora, Ohio. The old house, the C.R. Howard House which I have always admired, is one of the few such houses in this part of the country.
The Cleveland Preservation Society and AIA Cleveland is presenting a 2009 Preservation Award for Best Residential and Renovation Project to John for his work. It was a labor of love for  him and the award is icing on the cake. Added to that  honor is an award from Heritage Ohio for Best Small Residential Project for the same work. He also wrote an article on the house which was published in a national stone masonry journal.
This was painstaking work which involved mixing and matching lime  mortar to retain the appearance of he original 150 year old surface. He was able to find the small stones used in the  repair right on the property, so that the connection with the early masonry workers gave even more meaning to the job. John has been a history buff since childhood and that is part of why he so loves this work.
A number of years ago on a trip to Wales,  he found out that his Burnell ancestors had been stonemasons. The present-day Burnells showed him some structures built by Burnells of the past and that's when he decided to reclaim his heritage. It's been a rewarding profession and I am happy that he is getting this recognition. He can also see the results of his good work in many areas of Northeastern Ohio, some of which you can see here.
Makes a mother right proud, too.
Posted by Guenveur in Kent at 9:36 AM

How wonderful that John's work has been recognized. He works hard and does seem to enjoy what he does, so it's fitting that he's been honored.

It's very interesting that he's following in his ancestor's footsteps. Neat!

You have good reason to be proud of him, Guenver.

Go, Bro! He does such beautiful work and he certainly deserves this recognition.