Snow: What Is It Good For? 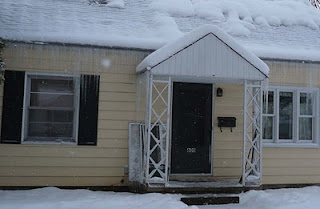 Happy New Year? Bah!! Although it is quite pretty, I do not like snow. There is no end in sight. We are luckier than many, however, since we have not had a blizzard - yet. My main concern is with having to drive in it, and now that I am an old party, worrying about falling on ice. Of course, I am at the age when one can fall on a perfectly dry, non-slippery surface. Why is that, I wonder? My balance does not seem to be so bad; I don't drink and walk or drive; I look before I step. Well, almost - I just tripped over the computer wires on my way into the kitchen a while ago. Caught myself before I hit the floor. I keep reading that the most frequent injuries suffered by geezers are those caused by falling. What the hell's wrong with us, anyway?

I am enjoying the Internet radio as long as I avoid the news. There seem to be a lot of bad things going on in the world - one story after another about people carrying explosives in their underpants (jockeys or boxers? They never tell you that.); new countries that hate us; unemployment for thousands; golf idols fornicating with bimbos; the guy with the really bad comb-over firing up his Apprentice program again; too much attention paid to people who should be banned from civil discourse.
So yesterday I listened to a program on BBC4 about the quality of voices and how the vocal cords actually work and how each of us has a distinctive voice and why that is and how actors are able to use their voices to express character, etc. We were invited to go to the BBC4 web site and record our voices with an expert who would then describe us down to our underwear practically. Where else can one find such wonderful escapist radio fare?
I am not a Civil War fan, but I have just read three books about it: "March", a fictionalized account of the father of the Little Women; "The March" about Sherman's march through my childhood home state (He wasn't around then, but there was still evidence of his evil ways.); and a really, really bad book by Jim Lehrer, a novel about a corpse found at Antietam in the present day and how this Hardy Boy archaeologist figures out who he was and how he died. I don't know why I kept reading it. If it hadn't been written by Lehrer, it would never have been published. I am now reading "Burning Bright," Tracy Chevalier's last book which came out a while ago. She has a new one about a woman archaeologist of thew 19th century, which I bet is a lot better than the one Lehrer wrote. I'll get around to it in a few years, given the lag time I have with current books. Those first two books above about the Civil War were excellent and I wanted them to be longer. I want to read Barbara Kingsolver's latest, too. I have to read the large print books now, so I do have to wait for them.
So that's how I shall avoid the news and the snow for the next few months, reading books about the past, figuring out how to work my Ipod Nano, and listening to radio programs about vocal cords and other little known exotica.
Posted by Guenveur in Kent at 12:52 PM

I liked "March." I generally like Chevalier, too, so I'll be on the lookout for her new one.

This is truly inspiring. Barbara Kingsolver will be presenting writers' workshops at the San Miguel Writers Conference in San Miguel de Allende, Mexico February 19-23 2010. I just signed up. It looks like a rare opportunity to meet her. Are you going?

I woul like to meetr her some time, but I am not going to any writers' conferneces. Tracy Chevalier was in Cleveland today to sign her new book, but I didn't go there, either..