A Day in Cleveland 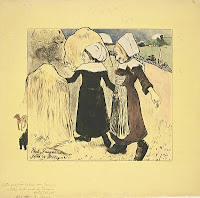 Yesterday Polly, John and I went up to the Cleveland Museum of Art. I wanted them to see the Gauguin show, which ends next week. It's not what you expect, since it is mainly prints he made in Brittany when he was younger. No nekkid Tahitian ladies. I had already seen it but I wanted to see more of the new East wing, which I had only dashed through the last time I was there. It had opened in July with much fanfare.

The architect of the renovations is a South American, named Vinoly, and not many people are pleased with what he has designed. The museum, like many others, needed more space, and that's happened, in spades. It is huge, and the West wing isn't anywhere near done. They are roofing over with glass what used to be this beautiful interior gardenplaza, which was right next to the cafe. It is going to be a "gathering place," which seems to be a concei t now loved by architects of large public buildings. (The Akron Art Museum, which opened its new, improved museum a couple of years ago, has one that looks like the underside of a football stadium without the hot dog stand.) The enclosing of this space at the Cleveland Museum means a loss of an open air garden in which one could have lunch and relax.
The new exhibition spaces are large and cold. All the warmth of the old museum is gone, or maybe I'm just not used to it yet. I did find some of my favorites which I always have to visit. They've been moved out of their former places. In the original 1916 building, which is still there and still beautiful, there were these sort of hidden niches, where certain treasures were displayed as if in the home of a wealthy collector. They have spread these out now, but at least they're still there.
One of my favorite paintings seemed to have disappeared, but I found it, in one of the new galleries, the very last one in a series of open spaces. It's not by a very famous painter, but it used to be in one of those little niches, along with some lovely decorative art of its period (early 19th century) and it just glowed on the back wall, so you couldn't miss it. It is of a young lady wearing an Eastern head dress and it's by an Austrian I've never heard of. I was very afraid they would have deaccessioned it, since it's not that distinguished historically. I also have to visit the silver tureen, which is an enormous thing crawling with what looks like lost wax created sea creatures and a crow. It's there, but not as elegantly displayed as it used to be. And I have no idea where the Guelph treasures are. Everything will be open in 2012, so I'll have to wait.
We had lunch at Presti's an Italian deli in, where else, Little Italy, and gelato for dessert. It was a nice day.
Posted by Guenveur in Kent at 10:54 AM

Oh, well, maybe some other time.

We are going to miss the "open air garden in which one could have lunch and relax," not to mention the free concerts, wildlife, etc. But, as you often reminded me, GB, with growth comes change, and I'm glad CMA is growing. And, btw, it's so fun to check KKII, every once in a while, though this is my first (published) comment (my cat and partner have heard others). You are such a talented writer, bringing so many contortions to my face, most often from convulsive laughter, some other times from tears that swell from some deep place, but always with fond memories of you. Here's hoping for a fabulous 2010!

So that's where you've been! I've missed you at WA and thought that perhaps you WERE gallivanting around the countryside with your daughter! One of my fondest memories of my first year in Kent was going to the Art Museum in the snowy winter and stumbling upon the conservatory (by the knights' armor) and finding it filled with forced spring bulbs. It is gone now I believe. And . . . I have passed on A Christmas Memory to sooo many friends, thank you for sharing it with me. I hope I will see you soon.