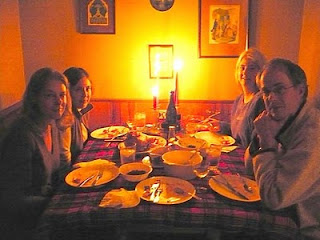 What a nice Christmas we have had, with three fourths of my children here and the other fourth Skyped in the afternoon. She had sent us a box of German goodies: chocolates, Lebkuchen and spiced tea.( That was lovely, but having her here would have been lovelier, of course.) John made us a big breakfast, with Polly's help: home fries, Amish bacon, scrambled eggs. People had gotten up a tad late, unlike the old days when "Can we get up now?" was heard starting around 4 a.m.

I'm the one who got toys this year - an Ipod Nano from Sally and an Internet radio from John. There will be a learning curve with these gadgets, although John has already programmed the radio so that I can get WCLV and BBC4. Now I can listen to the opera on my stereo and enjoy the quirky (to me) British programmes. There's one channel which plays the Goon Show! Or I can listen to broadcasts from Lower Slobbovia or some thousands of other countries in all languages. The Nano has a video function which we have already played with. Now I have to learn how to download podcasts and other things. Music is easy, since I've messed with ITunes in the past. Sally has an Ipod Shuffle which we gave her a few Christmases ago, so she's conversant with those things and has already helped me with some things. Both of these toys have manuals and web sites to help, so I shall occupy myself with figuring out what's what.
We had a good dinner with turkey and company Jell-O. We have so many sweets around that we have hardly touched the apple-walnut-raisin pie that John made on Christmas Eve. We had gone to our usual Universalist Unitarian candlelight service, where we saw old friends and listened to the choir and sang "Silent Night " in English, German and Spanish. Unitarian are all about diversity. (A friend had once expressed her concern that "Unitarians are not Christians." but they are more Christian than a lot of people who claim to be so.)
Tonight we are going up to the Trinity Cathedral in Cleveland for the Boar's Head Feast and then to the Number One Pho for dinner. Perhaps we'll swing by the Christmas Story House on the way home. A very nice holiday has been had by all here and I hope for everyone else.
Posted by Guenveur in Kent at 12:48 PM

It sounds a truly lovely day. Ours was quite splendid as well.

grednef: pretzel crumbs mixed with shredded parmesan as a topping