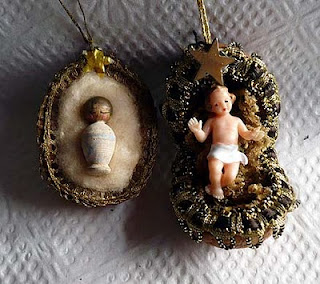 We had our annual caroling party the other night, which meant that I finally got the manger and my cheap little lighted village up and running. John baked two pies, one apple and his first ever pecan pie. Both were delicious and well received by all. We had cider to wash the pie down. I am still amazed that we can crowd all these people into this living room, especially with the tree up, which rather restricts space. There were fewer than usual, only thirteen of us, rather than the usual 18 or so.

We do this acapella because that's the way we like it and also because guitars would take up too much of the limited space. I reckon we went through about 25 carols or so, in four part harmony. We have song sheets with the words and we all know the tunes. We save "Silent Night" for next to last with "We Wish You A Merry Christmas for the grand finale.
Years ago, when we were younger, we tried doing this outside, but when we went to the homes of non-singing friends, they just stood in their doorways, confused s to their roles as recipients of carolers. Were they supposed to ask us in? Distribute cookies? Join in? Since everyone involved, including the carolees, were freeing, it just didn't work, and we just do it here in the warm living room.
When my sister and I were Girl Scouts, back in Atlanta, our troop would go out caroling at a few homes, but also to the orphanage and the TB hospital (at which I would try not to inhale lest I become contaminated.) Occasionally we would be given treats, because Southerners now how to deal with people singing out on their front lawns.
We have a new walnut Baby Jesus for the tree. The original was given to me 40 years ago by a non-observant Jewish friend. She and her husband decided that their children should go to Saturday school at the temple in Akron and learn about their Jewish heritage. Unfortunately the children took it very seriously and decided that Christmas was unJewish. My friend had to give up the Christmas tree, so she would give me an ornament every year to get her Christmas "fix," and admire our tree. Well, that little walnut infant is rather dingy, but I love it because it reminds me of a dear friend who is gone from this earth. Polly just happened to be given one by a friend this year, so we added him to the tree. He's much fancier than my old one, but is a welcome addition.
Since Polly is home for Christmas this year for the first time in many years, she and Sally decorated the tree with more than the usual number of ornaments, going through the box and pulling out things they remember from their childhood. The tree has born up well under the onslaught. The tree is, as usual, the most beautiful tree ever.
Posted by Guenveur in Kent at 10:15 AM