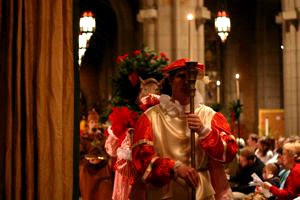 We were so lucky yesterday. Snow had been predicted, which always makes me nervous when travel is involved. Even though we're only 45 minutes from the Trinity Cathedral in Cleveland, I still don't like to drive or be driven when there is snow on the roads. However, the sun shown all day with nary a flake.

We got there early enough to get our usual seats. This year there was a full choir in the back of the nave which was quite good. We could not take photos with flash so I am including a picture from their web site. There are several groups in the procession: first, the Beef Eaters; then monks who light the tall candelabras; then the food and flag bearers (boar's head, roast peacock, sweetmeats); then a hilarious group of teeny little elfish jesters in bright green and red; then the Herald who sings the Boar's Head Carol; Good King Wenceslaus and his servant;the Yule Log, which this year was rolled in wildly by some little bad boys who kept fishtailing it around the corners, almost throwing off the little one who sat astride it ringing a bell; the Waits who are merry makers; Joseph and Mary, she sitting on a donkey, which this year did not bray although we wished he had; shepherds with one sheep which this year did not bleat; the three Kings in all their splendor. All this is accompanied by music from the participants and the congregation and there are horns along with the mighty organ.
The thing is, we have got to quit telling people about it. Some people we told about it who came last year were back this year bringing friend with them, and I can see this multiplying next year as those new people bring more people. Well, it's a lovely thing, and one does want people to experience it. When we went to Number One Pho for dinner afterward, we ended up with 13 people at our table, and there were 6 more who went to another restaurant which didn't have room for all of us. But we had a splendid time with some really fine people.
Oh, before Christmas, we went up to the West Side Market and I found out that my Greek bakery lady, whose picture was in one of my posts last year got married this year and I met her handsome husband. I am so happy for her.l Her father does the baking and she has staffed the stand for many years. I had visions of her growing old (she's probably around fifty something now), slaving away for her father . Well, she was beaming when she introduced her husband. They will be going to Greece for their honeymoon this spring. An d, she had tera misu (even spell check doesn't know how to spell it!)instead of the usual torte which I have always liked It was excellent.
Posted by Guenveur in Kent at 7:04 PM

We went to Boar's Head Festival last year for the first time and loved it! We look forward to taking Sam and Caroline in a few years . . . .

saisili: a certain Italian city referred to by a Suthren lady