The Book of May 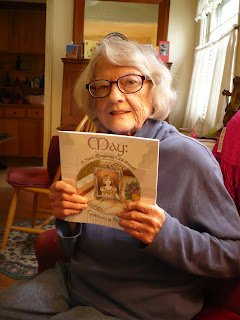 Many years ago, when my parents were getting old, I would take a tape recorder with me when I went to visit them. They had both been born in the 19th century and I wanted to know what their growing up had been like. They had lived into the late 20th century and had experienced many rapid changes over their long lives, from horse and buggy to men landing on the moon. My mother had vivid memories of her childhood and I loved hearing about her large family, both the good and the bad.

After her death, I decided to use the tapes I made as the basis for a picture book. I loved working on it. She had a few pictures from her early days, which I could use for reference, and some great descriptions of the people in her extended family. I also had the chance to visit Holyoke and Springdale, and found the house she had lived in as well the grandmother's house, now stripped of its gingerbread trim. It was the Holyoke library which moved me the most. It had been built in 1904, when Mother was 5 years old and is a magnificent , enormous Greek temple. I had visions of this tiny little blond girl walking up to this grand edifice, where she spent hours with her beloved books.
Last summer, my niece Jill was married to Brian, and I asked her what she would like for a wedding present. "Something about the family," she said. I thought of my book about Mother, and thought I would make a color copy of it for her. In the meantime I had read a lot about people self-publishing their work and decided to look into it. A friend of a friend had tried Authorhouse and had been very pleased with their service. I gave them a call and signed up and here's the result: "May: A New England Childhood."It's in full color and I am very pleased with it. It was all done electronically and until I received my author's copy I had no idea what it would actually look and feel like. It was a thrill to hold it in my hands, and I know my mother would like it.
Warning-Sales pitch ahead. My siblings and my children - and Jill - will all get free copies, since that's part of the deal (10 free copies) but if anyone else wants it - and it is a fine little book - will have to pay $12.99 for it at the above web site. It's listed under "Children's Non-Fiction," but it's more of a memoir of a certain time and place. 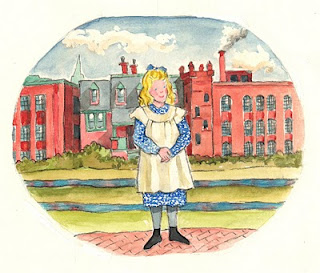 Posted by Guenveur in Kent at 2:44 PM

I can't WAIT to hold the book in MY hands. Even the little Xerox copy you gave us years ago is a treasure. May "May" take wings and fly!!!!
Your proud sister

WOW! I'm so exited to read it. This blog is also really cool.
-DREW HARPER