I Know What The Question Is, But What's The Answer? 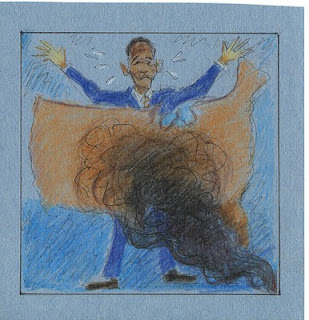 And the question is, why doesn't Obama do something about the oil spill? I love that the people who are demanding this are those who also want the government to keep the hell out of the private sector. They carry on about the government trying to control the banking business and health care, and shout in letters to the editor that Obama is a socialist, communist and fascist all rolled into one evil personage.

The media, radio, print and television want him to be more emotional. They don't like rational, logical carefully considered responses to problems. They say he is distant from "the people." Hey, we had a guy that a lot of people wanted to have a beer with at the local saloon, who could shed a tear on occasion, but who also got us into this mess with his and his cohorts' approach to big oil, their own personal gold mines.
I have not heard exactly what it is that Obama is supposed to do, according to the people who want him to do something. Send in the army corps of engineers. Oh, wait a minute, aren't they the people who messed up the Delta to begin with? Send in the National Guard? Oh, wait, they're trying to deal with tornadoes and floods, or fighting in Afghanistan. Commission all those smart people who claim they have an invention that will clear this thing up in no time to take their inventions down their and get to work? Oh, wait a minute; are there actually such people and do their inventions really work? (Hey there, Kevin Kostner!) Should he personally clean a pelican while shedding copious tears?
It's obvious that the BP people are apparently completely incompetent and dishonest, but can an American president take over an international oil company? Is that what he should do? Should he bomb London? Is that what people want? Should he go on TV and gnash his teeth and rend his garment in grief? If someone has specific answers to what can be done, it would be helpful if that person could let us know.
This is a man-made tragedy and it will take everyone a long time to resolve all the problems resulting from our heedless oil greed. And that's everyone of us, not just the president.
Posted by Guenveur in Kent at 2:23 PM

shempica: a rice pudding type of dessert with crystallized lavender