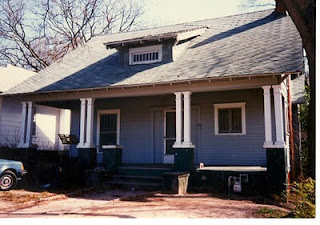 When I took a few writing classes a several years ago, one of the first things the instructor talked about was that the writer must be able to use his/her sense of place, home, roots. I was born in New Jersey and left there when I was 4 to move to the South, where my father was from. I spent eight years living in Atlanta, which was actually a Southern city in those days. I spent eight years there before moving to Ohio, and I have lived here for 70 years. But Ohio is not my home, not really. I guess one's childhood home remains the place one identifies as "home." Having a Yankee mother kept me from picking up the old biases of the South, biases which keeps many people from appreciating the better parts of that culture.

I am thinking of that today because last night I watched, for the umpteenth time "To Kill a Mocking Bird." I had re-read the book a couple of years ago and found that it had lost its magic for me. That's not to say that it is not a good book; it's just that from this distance (it came out almost 60 years ago, in the pre-civil rights era) some of the things Atticus says in the book seem paternalistic now, as was not uncommon among "good" white folks in those days.
However, what I originally loved about the book and the wonderful movie, written by Horton Foote, is that it brought my childhood back so vividly to me. Even the houses on the street looked like the houses on the streets I roamed in Atlanta's West End. On our block, we even had our own Boo Radley, only ours was a severely, very homely, retarded, and much loved by his family, young man. We were terrified of him because he would sit on his front porch rocking in a noisy rocking chair and make strange noises. His mother claimed he was imitating the street car bells. She once showed me a picture of him when he was a toddler and very beautiful. Sad. His parents finally had to take him to Milledgeville to the state institution because his younger teen age sister couldn't have her high school friends over. He died within a year.
Two houses down from us lived a woman divorced from her army officer husband. She had two sons, one a biker, and the other a handsome young man who would dress up in his mother's negligee and sing Gershwin tunes in a falsetto voice in his back yard. The biker would periodically beat his brother up. The people who had lived in that house before had a daughter we would play with. The mother and grandmother spent their days ironing wax paper bags as some kind of piecework , so their house always smelled of hot wax.
Across the street was a large gray Victorian house where another woman lived with her two teenage daughters, both overly developed for their ages. The husband and father was in the federal penitentiary for mail fraud. They had this great gazebo in their backyard, but the two girls were too old for us to play with. And their father was a criminal!
Next to that family, in a big white house with a huge porch, lived Mr. Mincy, a retired Georgia farmer whose hero was the former governor, Eugene Tallmadge whose black wool broad-brimmed and red suspenders he emulated. Mr. Mincy kept two contented cows in his back yard, and sat on his front porch every afternoon chewing Red Mule tobacco. I used to sneak over and gather the tiny tin Red Mule tags he'd throw over the porch rail. Every once in a while his two grandsons, with names like Floyd or Earl, would roar into town on their motorcycles and flirt with the two girls from next door.
It was an interesting neighborhood in a Southern Gothic sort of way, and I thought everyone lived in a neighborhood like that until we moved to Ohio. Maybe Southerners were more likely to live their lives out loud, but almost every place I've lived since has seemed so bland. Our old neighborhood on Sells Avenue, S.W., Atlanta, Georgia, is now all African American but probably still has stories to tell, and may even be haunted by the smell of hot wax, the noise of someone trying to sound like street car bells, the aroma of tobacco juice and cow manure, or a faint androgynous voice warbling "Love Walked Right In.".
I took the above picture of our house on a trip to Atlanta some years ago. When we lived there, it had a white picket fence and a gate we would swing on, and grass in the yard. We spent a lot of time on that porch catching flies for our brother's lizards, which he kept on the back porch in neat little wooden cages.
Posted by Guenveur in Kent at 12:53 PM

Ma, you need to write down your memories of Depression era Atlanta. I loved hearing about them as a kid, and it's a piece of history that would be of interest to tons of people. I've often considered writing down memories of growing up during the turbulent 60's, yes, even in relatively calm little Kent, OH, but watching things unfold as Frank Blair intoned the morning news on the Today Show, or Walter Cronkite described them on the CBS Evening News, those really shaped my impressions of what was going on during those times.