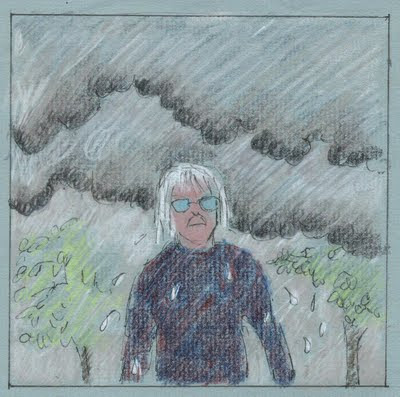 I don't know where May has gone. I've had only one post at the beginning and here it is the 28th already. There was a disruption the second week of the month when Emily came for the Harper-Harper wedding in Columbus. That was a very fine thing, since it meant for me a reunion with my siblings, It was short, but delightful and the wedding was lovely. When we got back from Columbus there was also just a lot of hanging out - and shopping- with Emily. SO that accounted for pretty much the first half of the month.

The rest of the time it has been raining, raining and raining. My favor tie month awash, but very green for all that. I haven't got my garden in. I've only had a few rare days to hang out my laundry in that usual sweet spring air which I waited for all during the crummy winter we had. John hasn't had enough dry days to paint the lovely lattice work he construed for the front porch-ette. Life has bee sodden.

However: we have not had lethal tornadoes or deadly floods. When I saw the pictures of Joplin, Missouri, and the flooded rads and houses along the Mississippi, I decided that complaining about rain is really ridiculous. Of course, once I decided that, we had a night of terror, with tornado warnings, endless thunder and lightening and scary wind. My friend Ann had called to ask if I was planning to watch the final Oprah show and she was in the midst of getting a new TV installed and would I tape it and she could come over and we'd eat Chinese food and drink tea in honor of Oprah. I had not planned to watch this modern day Himmelfahrt, but Ann's such good company that I agreed. I DVRd it and Ann arrived bearing won ton soup and chicken broccoli and we settled down to receive Oprah's blessing and thank yous for being such wonderful fans from whom she had learned so much while teaching us how to live our lives to the fullest and all. I remembered why I had quit watching her show years ago, when she quit featuring transgendered dogs and cats and started turning into the Messiah. So we're eating and being blessed when the tornado sirens went off. Since we were watching a taped show, I thought I should check out the news and there was Kent right in the path of a tornado, with a breathless caller telling of swirling winds and flying roofs not 10 miles away. Ann, who's from Alaska where they don't have tornadoes, only bears wandering into your bathroom in the middle of the night, was getting nervous, so I paused the Ope and we descended to the basement, sitting on John.s buckets of lime...the mineral, not the fruit. I passed the time by telling her what the basement used to look like and how much time we had spent there during tornado warnings when the kids were little. The tornado warning went off finally, so we came back up and watched more self- aggrandizing crap until the power went off, before we got to see her cry. Ann left and I went to bed in the dark.

The power came on around 10:30, but then the lightning and thunder and wind started and kept up pretty much all night. There was a lot of damage scattered around the area, but nothing really serious, unless it was your personal roof that got holes poked in it.

But we were spared what so many people in the South and the Midwest have suffered. I can still complain about all the rain, but I don't feel good about it.
Posted by Guenveur in Kent at 6:49 PM

Didn't even know about the Ohio tornado scare until two days later. How scary scary. The first time I EVER heard about a tornado was back in the 30's, the Gainsville, GA one when we lived in Atlanta. The Atlanta Journal covered it in great gory detail and it scared the bejesus out of me. Then, the Wizard of Oz. Today's MemorialDay (Decoration Day) and I remember seeing a couple old Civil War vets riding in a Model A in the parade in Atlanta, also in the 30's.

"Modern day Himmelfahrt" - you slay me!