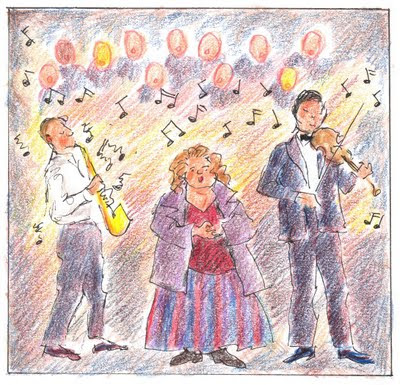 This was another week-end of one musical performance after another, and a varied one, at that. It started off on Friday evening with the last "New Music" concert of the year at the university. Now I an the kind of music lover who likes to be able to whistle or hum what I hear after the concert. I was dragged to my first concert of this type last fall by a musician friend who told me that this program needs our support, especially with a university president who seems to be trying to make this place a vocational school. I actually enjoyed it quite a bit. They played around with both instruments and notes in a way of exploring possibilities. At one point they turned out all the lights and the instrumentalists surround the audience, and it was a bit like being musically breathed on, only without the germs or halitosis. I think ya hadda be there. So I have gone to almost all of their concerts.

This last one was not quite so interesting, and there was an annoying Lucio Berio saxophone solo which grated on the ear and the nerves, but there was a percussion piece that was dynamite. One of my spelling group friends was there. She is my age, and she is studying composition with one of the students whose composition was featured. She said that a person can't just vegetate because of being old, and she's looking for new ways to express herself. She's a musician and has done some traditional composing, but is excited about moving beyond the traditional. I still prefer listening to traditional music, but these concerts are fun and stretch my mind as well as irritate my ear drums.

Saturday was "Il Trovatore," which I consider the "Music Man" of all operas. I mean there's not a dead moment in the entire piece. One glorious melody follows another: arias, duets, trios. The cast consisted of four of the best singers now performing. Of course, the plot is ridiculous and convoluted, involving infanticide, fratricide, suicide, gypsy curses, and the usual doomed lovers. And there was Dimitri Horotovsky who is a Russian hunk who played the bad guy, which is what baritones usually have to do, so that the tenor can get the girl and all; that is, if he lives long enough. It was just a stunning performance all around. I shall miss the last one, which is "Die Walkure," but I'm not much of a Wagner fan, unless Anna Russell is explaining it.

Saturday night I went to hear a symphony concert by a neighboring town which shall remain nameless. If you've ever heard the Portsmouth Sinfonia, you might get some idea of the level of professionalism. It's an all volunteer group with professionals mixed in. I went because a friend's son was doing Beethoven's Violin Concerto. He's a professional musician from Chicago, with impressive credentials and international performances. This summer he will be that concertmaster of the San Francisco Opera orchestra. The first half of the program I was wondering if he had known what he was getting into. I needn't have worried. He was wonderful, so good that I didn't even hear the damned orchestra. I think he inspired them to crank up their competence. I could even forget their tortured version of a selection from "The Fire bird Suite" from the first half of the program. I heard later, since this is a volunteer group of quondam players, that not everyone shows up for rehearsals and that the conductor has high hopes when the performance tine rolls around. But this violinist made the evening worthwhile. And the last movement of that concerto is one of my favorite pieces of music to whistle. Catchy.

The finale of this music est was Sunday night, with the university symphony, the Kent State Chorus and the Kent Chorale preforming the magnificent Ralph Vaughan William's "Dona Nobis Pacem," which I had never heard. It's a very powerful number, especially one part based on a Walt Whitman poem mourning the death of soldiers, sad and moving and beautiful. The Kent Chorus is a mixture of townsfolk and srudents and they practice like bastards all year, doing one concert at Christmas and then this final one. One year they did "Carmina Burana" with something like 200 singers. It was amazing. And I have to say that this year they matched it - or surpassed it.

There are a couple of Cleveland Orchestra concerts coming up in May, the last of the year, and then there'll be the Blossom Chamber Concerts starting in July. I do get my fill of music around here. Nice.
Posted by Guenveur in Kent at 4:54 PM

Ah, the Portsmouth. "Some playing difficult instruments for the first time."

Thanks, Sally.I knew that but got Benjie stuck in my mind.