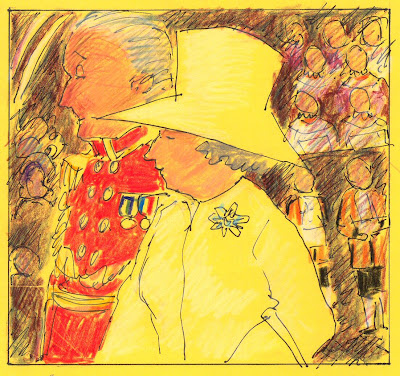 I didn't intend to watch the Wedding of the Century, as some over-excited commentator called it. Today was the day of the annual Literacy Bee, in which I was participating as a member of Team KAOS (Kent Area Orthography Society) and I had spent most of my dream time spelling words like "fescennine," foehr" and "Boeotian." This is a fundraiser for the literacy coalition, and our team had already won it twice. So I woke up around 5:30 a.m. and decided to divert myself by watching the Event. First I had to listen to the likes of Baba Wawa, who has a habit of telling you much too much trivia, and others blathering away as the royals left Buckingham Palace for the Abbey.Gawd, they were so annoying. I could have turned the sound off, but then wouldn't have known who all those overdressed, mega-hatted people were, and what's the point of watching if you're not going to learn one royal from another? I did recognize Elton John, looking sweaty in the Abbey, bless him.

Before Kate showed up, there was much speculation about what the queen would be wearing. Well, HRH appeared on the red carpet, looking like 1.) a giant daffodil or 2.) one of those butter sculptures so beloved by Midwestern state fair goers. I almost went out to the kitchen to make toast to go with her, but Kate, whose dress has been the subject of much discussion, was about to make her entrance.

It seems that she had borrowed her grandmother's wedding dress from the dowdy fifties. (At least it wasn't like that outrageous monstrosity that poor Diana was burdened with. And I mean burdened; that dress was wearing her, I do believe, poor dear. She could have bee sheltering a passel of street urchins under that thing.) So Kate looked okay, if a bit retro.

So she and William were solemnly married, and now it's on to married life. The word is that they will not have a household staff (right!) so Kate will have to contend with the dried up blobs of toothpaste in the sink and hearing :"Honey, have you seen my epaulets?" and "What! Chicken ala Me for dinner again?" like any other married couple. I wish them well.

I got to hear the magnificent "Jerusalem" ringing through the Abbey. What is it about that song? Makes me all verklempt, and I'm only a teensy bit British. I had to miss the royal carriage and all because I had to get back to studying "keratomileusis." "autochthonous," and "xanthosis" for the bee. Those words never came up, but we won our third title. I missed on the word "propitiate." Go figure. I was SO prepared for those other words that I blew it on a simple one. I threw in a "c" instead of "t." But we won it anyway, thanks to the level heads of the other two team members. And I can get back to simple words and Spell Check.
Posted by Guenveur in Kent at 4:02 PM

"I almost went out to the kitchen to make toast to go with her" -- and I just almost spit my coffee onto the keyboard when I read that!

I liked the "Chicken A La Me" comment, as well as the vision of Diana hiding street urchins under her dress. A very funny piece!

You SAID i! If I could express myself as brilliantly as you, G.,those would have been my comments. The drawing was great also. Really funny and ,as they say, trenchant. You're the only one besides me who thought her dress was on the 'dowdy" side. Congrats on the spelling bee triumph. What were they thinking with those esoteric words!