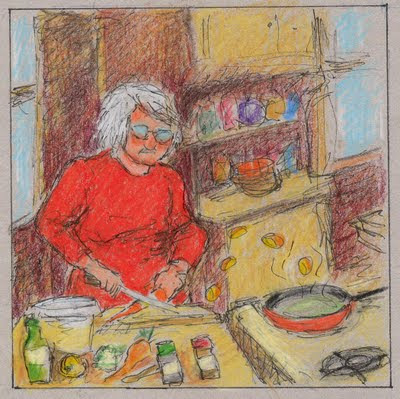 If I should ever become rich, the first thing I would do is to hire a meal planner/cook/. I enjoy eating, but I am not one who finds cooking especially pleasurable. I cook from necessity. The actual act of preparing a meal is not the part that I find the most boring. It's figuring out what to have. I mean a person can't just have chili every night, or spaghetti, or macaroni and cheese, to say nothing of wienies and beans. A person needs variety. There are people who eat out a lot and always get the same thing, but I am not one of those people. And finding variety at home is hard, requiring foodal imagination, of which I have none.

However, the Akron Beacon Journal, one of the daily papers I read, has always had really good, creative food editors who are also very good writers. I now there are folks who buy cook books to read, and I am also not one of those people. I do not watch any of the food channels on TV, finding them not very funny or thought provoking. But I do look forward every week to the Wednesday BJ food section. The current editor, Lisa Abrams, has written some lovely pieces about her Lebanese family's life and cuisine. She did a little piece on a neighborhood ethnic grocer/bakery store a while back which made me feel ass if I'd been there. It's gone now, of course, like all neighborhood shops. She also provides some great recipes for all kinds of dishes, and includes recipes from other sources. I have a little box full of them, almost all of which I have tried, and in many cases, repeated. Some are easy, some are not.

This past Wednesday, there was a recipe for a chicken mango soup, which looked pretty good, so I decided to try it. It turned out to be quite labor intensive. First I had to find mangoes, which took trips to a couple of stores. Then I had to find affordable limes and cilantro, which I found in one place. Then I had to find creme fraiche without going to Akron, which I did not find because I was already tired of looking, so I got coconut milk, which the recipe said I could do. I already had curry powder and cinnamon.

There was a lot of peeling, chopping, dicing. Peeling a mango is easy; chopping is hard because of the enormous pit around which one must carve. I misread the amount of curry and had to scoop it back into the container, only I scooped it into the cinnamon container by mistake and then had to scoop it out of that. (The next time John makes an an apple pie, there may be an unusual, but interesting flavor added.) There was sauteing, blending, stirring. I opened the can of coconut milk without reading the label first, not realizing that it solidifies while canned, which means you gotta shake it or roll it or whatever so I had to transfer it to a lidded container and shake the hell out of it.

By the time it was done, the whole house smelled wonderful and I was exhausted. However, it was the most delicious thing I've eaten for a while, and even better the next day. Now I shall have to make it again. It should be easier, since I know where to find things, and that I should shake the coconut milk can before I open it. And I Shall get a good night's sleep before I make it and perhaps a nap in the afternoon first.

All the favorite soups we have here, carrot ginger bisque and butternut squash (John makes that one) require a lot of chopping, sauteing and blending, which must be what makes them so very good. But tiring. And I would still like someone else to do it.

If anyone wants to try this, get some rest beforehand.
Posted by Guenveur in Kent at 10:41 AM

i wanted to send your chicken roundabout thing to Anne and Jane, but "they" told me the EMail domain?? name was wrong. I tried and tried.
Oh, well, I loved it and the next couple as well.
I also hate to cook.
Love,
Yo Sistah