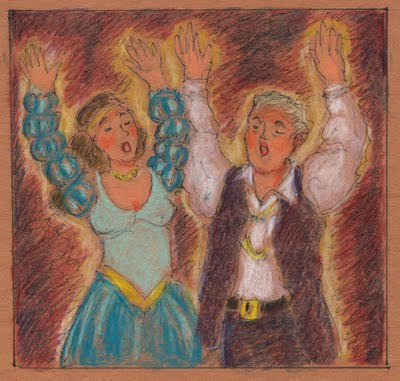 In the past two weeks I have managed to take in three operas...and there's another coming up this Saturday. On April 9, I got in two in one day. The first was the Met HD live broadcast of Le Comte Dory, with adorable Juan Diego Flores, a bel canto comedy by Rossini. The opera started at 1 o'clock and Renee Fleming announced that Flores' wife had given birth to their first child within the hour. At the intermission, he said that it was born at 12:25 and he still made it to the Met by 1. That's dedication, I'd say, and he sang like his usual angelic self. I've see him in three operas now, and nobody has died in any of them.

The second opera I saw that Saturday was "Semele," by Handel, and it was a student production at the university. It had its comic moments, but Semele died at the end because she wanted to be immortal, like Jupiter, who had just whisked her off for a roll in the hay. She was good enough to bed,m but not worthy of deification, I guess. It was well done - well staged and directed, but there were some voices which need seasoning. I mean, after the Met production, how could any students measure up to that?

The last opera was an outstanding production by the Akron Symphony Orchestra of he great American opera "Porgy and Bess." The conductor started auditioning hundreds of local Black church choirs last winter, selecting a few singers for some parts and many for the chorus. The main leads were nationally known singers, but a couple of the local ones were just amazing. I had heard a concert version of "Porgy "with the Cleveland orchestra many years ago, but had never seen it staged. It was just wonderful, and the audience went wild with cheers and applause. Great stuff.

Coming up Saturday is "Capriccio," which I've never heard of even, with Renee Fleming getting to wear great clothes and being glamorous. Don't know if I'll like it. There are only a couple more of these things this year and it's been a very good year, too. Lotta good singin' goin' on.
Posted by Guenveur in Kent at 4:42 PM