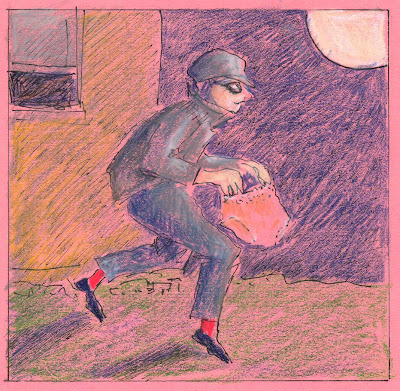 I have mentioned my underwear before ' in spite of the fact that such things used to be called "unmentionables." But, hey, we're in the 21st century and "reality" TV seems to find nothing unmentionable or unshowable.

When I did mentioned my unmentionables, I wrote of my favorite underpants, the cotton ones with the lacy elastic waistband, and how they don'[t seem to make them any more. For that reason I treasure them, the somewhat well-worn ones I have had for a number of years. I started out with six of them. This past year, one pair disappeared and I had only five. I have no idea where that one pair went. I am not in the habit of leaving my nether garments scattered about. I did not do that even in my younger days. I was not that kind of girl, as they used to say.

So this week, when I did the laundry, there was another pair missing, so now I am down to only four. How do these things go missing? I do not hang them out on the line , at the mercy of a passing pervert. (There was actually someone stealing underclothes off clothes lines a few years ago. I don't know if he, or she, was ever caught, but in any case, mine were never in danger, not being hung outside.)

I have, of course, scrounged around the washing machine, since things can get caught up inside the spinning tub. One of my sister's song hits is "The Lord of the Socks," a lament on the phenomena of finding only one sock of a pair in the laundry. The Lord of the Socks eats them, but she wrote nothing about his appetite for underpants. I mean,m yuck!

So I am slowly losing my favorite smalls, and I have no idea what has happened to them. They are not he sort of thing your average transvestite would be interested it; too plain, too unsexy. And I don't know how that person could even get at them, or how any person could. I know that Dupree has not taken them, even though cats do like to sleep on clean laundry.

I guess this will just have to be a mystery.
Posted by Guenveur in Kent at 4:54 PM