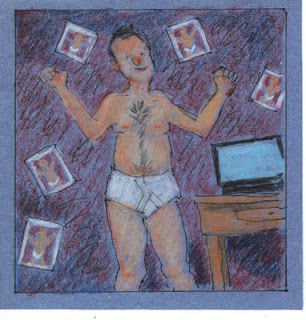 Wouldn't you hope that a person in a public position would have at least half a brain? Seriously. Why is it that these bozos do not understand cyberspace or the prevalence of the kind of technology that is gong to bite you in the butt if you do something stupid, really stupid? And why would anyone assume that a picture of his crotch is appealing? (Freud was wrong. It's not women who have penis envy; it's men, who can't wait to get into "mine's bigger than yours" competitions.)

This New York Wiener dude has got to have an IQ in the single digits if he thought he could get away with such juvenalia on the Internet. Some people are saying that sexual exploits should not be that cuase of ousting a politician from his job, but stupidity definitely should be.The sexual stuff is just pathetic but lack of good sense  demonstrates  the kind of fatal flaw of leadership. Yeah, I know, Bill Clinton was a total jerk, too, and I still  don't understand how he could have been so stupid and arrogant.

Who knows how many of these idiots are running our government when they're not flashing their privates all over the Internet. I have no doubt there's a mad rush to cancel social media accounts as I write this --but once it's in there, it's in there, and somebody's gonna find it. Who's next?
Posted by Guenveur in Kent at 4:59 PM