If you love to think about Paris in the 20s when all those  ex-pat American literary greats, artists and musicians were living ands working there, you will like the latest Woody Allen movie. It is completely charming. Even though he has stereotyped the characters (Hemingway is a complete blowhard, speaking in the style he wrote, purposely funny), it is just such a fine fantasy that you wish you'd been there, too. His character even gives Luis Bunuel an idea for the movie that later made him famous. Man Ray talks about photographing a woman in the way he eventually did. Clever stuff. 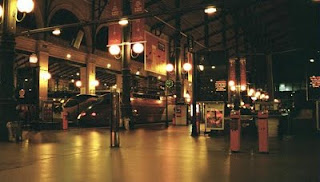 Nice  to see that the Woody Allen character is played by a younger actor,  wearing the usual tweed jacket), so that you're spared the usual sight of 75 year old Allen with a 20 something woman' The soundtrack - Django Reinhardt, Sidney Bechet, Cole Porter - is just great. Woody Allen always has great soundtracks, like all that Gershwin in "Manhattan," a very uncomfortable movie about his infatuation for a high school girl - ugh! But  great soundtrack. He also has the best cinematographers and Paris looks wonderful in this new movie. I've never been there, but it looks the way you think is. Oh, and Kathy Bates plays Gertrude Stein, but looks too much like Kathy Bates to be believable.
Posted by Guenveur in Kent at 8:07 PM