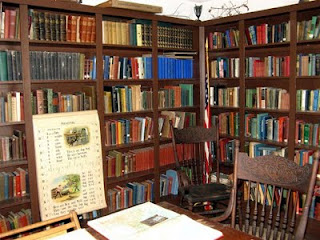 Things are different now in libraries. For the past ten years or so, out area libraries have been on a building spree, erecting very large spaces. And I mean, very large spaces, in which the shelving looks a bit lost and meager. High ceilings, vast staircases, miles of carpeting, and snack bars. Jusst in time for the revolution in reading materials, libraries are dedicating enormous spaces for traditional books. Many of them are also mounting tax levies for the voters, come November. They all had lots of money for their expansion, but now they need more dough for operations. I am all for libraries staying in operation, no matter what kinds of reading, or information resources they are going to handle, but I think it would have been a good idea to have more foresight, both in the financial end of things and in the future of reading material. There is a whole new generation of people, many of whom don't read at all, and those who do, use E-readers and God only knows what technology may change that.
But what I miss most of all is that library smell which permeated the smaller, more compact spaces which used to comprise the buildings of old. It hit you when you walked in, a combination of paper, cardboard, glue,  dust, maybe the homeless in the periodical section, and on rainy days, ,wet wool. It gave off an aura of BOOKS, lots of BOOKS and primed one for the fun of finding just the one that would take you some place you'd never been.
I loved the library i n Springfield, Ohio. It was a Richardsonian stone building, with a tower which led  to the children's room, named for Lois Lenski who had spent her childhood in that town. I loved her historical fiction about pioneers, Indian captives, New England small towns and adventurous and brave children. Our library in Atlanta, called the Wren's Nest because it was near the same named home Joel Chandler Harris, was basically a storefront and it was my first library and I loved it, but the ambiance of the one in Springfield was just so satisfying. The main reading room did have a fireplace and high ceiling which was later divided into a second floor.There were exciting glass floors in the non-fiction and reference sectionwhere my sister and I would get out Eveybody's Favorite Music books from which we would manage to murder some of the classics. (I shouldn't say that about her; she played very well.)
Summer was a great time for going to the library. Since  we were pretty  much library kids, we never got  into the Nancy Drew books, since librarians apparently  looked down on them, but we  made up for it with mysteries by Augusta Huell Seaman, in which almost every story seemed to have its roots in the Lost Dauphin of France or the Princes in the Tower. They were very old fashioned books and we loved them. When we were older we got hooked the the "Jalna" series, which had been popular in the twenties.  They were a multigenerational saga about a Canadian family, covering over a hundred years. There were scandals, chaste romances, births and deaths and we just dove into them.  We devoured books by Richard Halliburton, who was an adventurer who traveled all over the world and did exciting things, or supposedly did exciting things. I think he was later revealed as one who embroidered his adventure a bit, but he knew how to tell a good story. All these books had that library smell, mainly because most of them were already pretty old by the time we got to them. We did go outside in the summer, swimming,  biking and hanging out with friends, but there was many a day when the only sound in the house was of pages turning.
I have nothing against new libraries, and I know that they are still places to make discoveries and a wonderful asset to a community, a valuable resource for adding to the quality of life. They just don't smell like books any more.
Posted by Guenveur in Kent at 6:08 PM

I SO understand what you are talking about! Geez.

A couple of years ago when we were on our way to someplace, we stopped in Jim Thorpe, PA, to see what there was to see and the best thing there was this library -- http://www.dimmicklibrary.org/ -- as charming inside as out. And smelled right, too.

Now I want to go to Jim Torpe, PA. Looks great, and so does library.