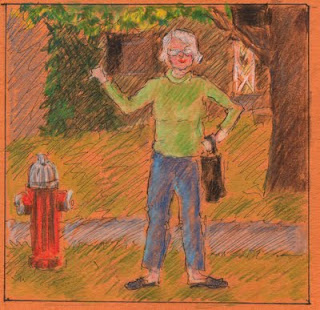 Well, July was just so hot that I couldn't get it together enough to update this blog. John put an air conditioner in the living room, which helped to cool things off in the afternoon, and another one in my bedroom, which cooled things off at night. I have never done heat well, even though I spent my childhood in the South. As a child, though, going swimming as much as possible and playing in the hose and just playing led me to ignore the heat. It wasn't until we moved to Ohio that I became aware of how disgusting summer could be. Ohio has miserable summers because of the humidity and there weren't any public pools where we could cool off when we first moved up here. Of course this summer was worse than most, so I spent most of July in a stupor. Now it's August with the cool nights and brilliantly sunny days with a touch of cool in the mornings.
The big news in my life is that I have to give up driving. I can't pass the reading portion of the drivers' exam that you have to take to renew the license. In spite of the treatments, the macular degeneration has progressed to that point, so I am now a pedestrian. We do have a door to door bus service, but you have to call three days ahead of time to book it, which takes all the spontaneity out of going places. I love to drive. I love to just get into the car and head out to wherever all by myself. And then there's the practicality of being able to run to the store, the bank, the movies and museums or the post office when you need to. I am going to miss that. I'm a believer in the adage "He travels the fastest who travels alone," something I like to do. It will be interesting to see how this turns out.
Had an exciting week-end. First, on Saturday, the ATT Uverse, system, which runs my TV, computer and phone conked out. The mo st important of these services is my phone, especially since the next day was my birthday and I knew family would be calling and I had no way of letting them know that I had no phone. I called ATT on my cell phone and they promised that someone would be out to fix it that afternoon between 12 and four. Well, of course that didn't happen; they would be here around 6:30 the tech said later. I had an important event Saturday night. I had won a very nice evening at Blossom Music Center with a free dinner (with Bob Conrad, the guy who owns the best classical music station in the U.S. of A., WCLV in Cleveland), plus parking in the close in lot, which means you can park only steps from the restaurant and the pavilion. It turned out that they could do it early Sunday morning, so that took care of that. I could do without the computer and TV for a few hours, but not he phone. The problem is that no one knows my cell phone number, including me, so I would be incommunicado without my land line.
The evening at Blossom was lovely. John went with me, having driven up from Athens County, and Bob Conrad introduced me to the other winners as "Mary Lu Walker's sister," since he features her frequently on his nationally syndicated Weekend Radio program. (See your local listings for day and time.) He is a charming man and a great host. The concert featured Russian music and a marvelous pianist who played the hell out of a Prokofiev concerto whole clad in a stunning viviid red evening gown. John had already bought tickets for next week's Joffrey Ballet concert for my birthday, so we had this as an extra treat.On my actual birthday we had dinner at the Pufferbelly with Sally and Cynthia.
Yesterday some friends and I went to see "The Help." We went to the early  matinee ($5 tickets and free popcorn) and the theater was packed. There was some problem with the projector during the last 15 minutes, so we all got free passes as we left. It was a good movie, with some fine performances. A couple of fiends tried to go last night, but found that the theater was sold out. My favorite film for the summer is still "Midnight in Paris." which I think I'll go see again. I have a couple of friends who haven't seen it yet, and it's playing up in Cleveland at the Cedar Lee, where all the good movies come, so I think I can wangle a ride. My brother Mike wondered if there were any Morgan Freemans in this area who would drive Miss G. around. If only.
Posted by Guenveur in Kent at 2:57 PM